Nestled halfway between San Francisco and Los Angeles on California’s Central Coast is San Luis Obispo, or “SLO” as native Californians call it. Though it’s a small town anchored by the local Cal Poly University, it’s almost always sunny and not as sleepy as its nickname might suggest. So if you’re traveling up or down the California coast and visiting popular spots like Monterey, Hearst Castle, or Santa Barbara, SLO is definitely a worthy stop on your itinerary. Here’s where you should start. 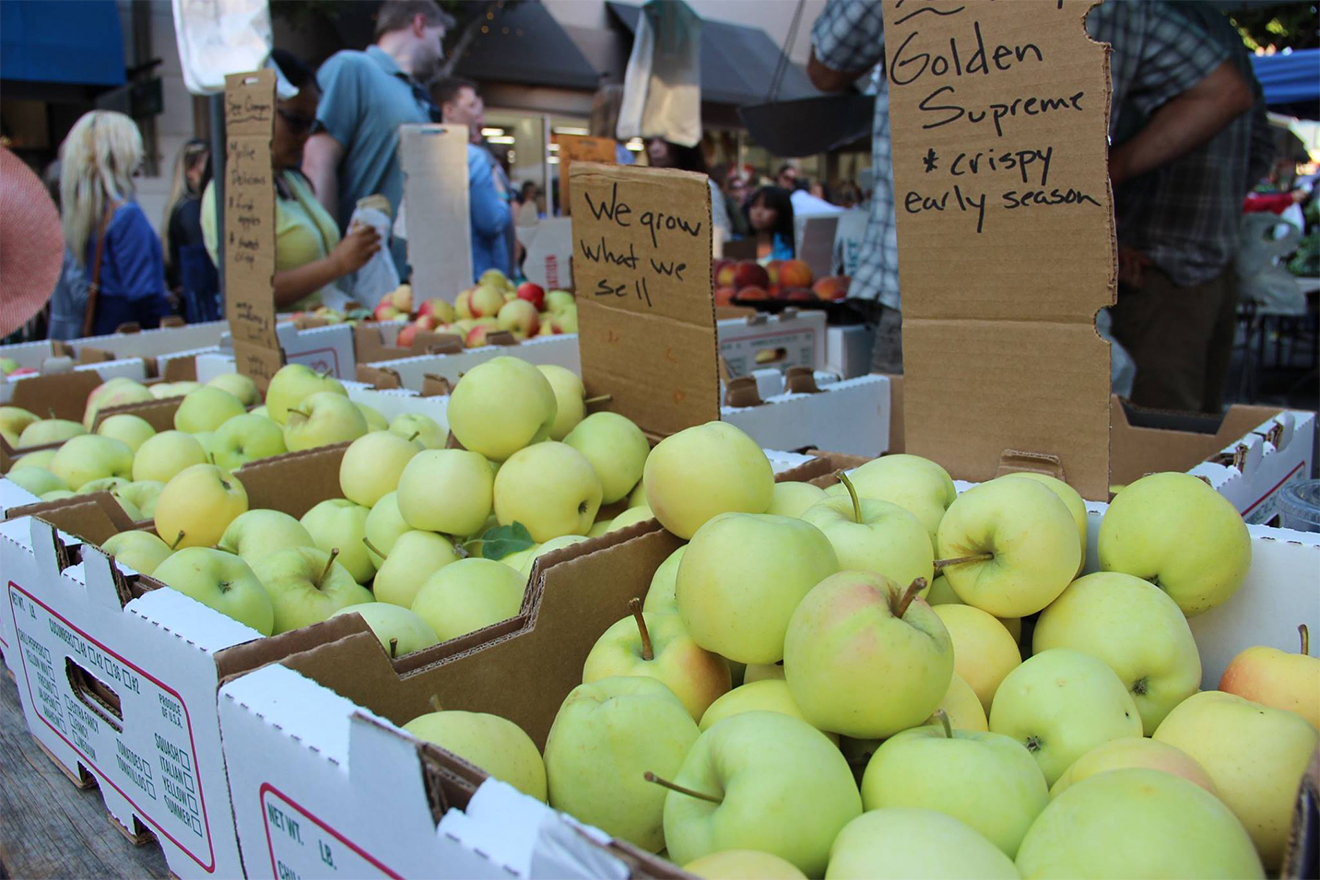 There are three rights of passage that a trip to SLO isn’t complete without. First, you must take in the town’s history with a visit to the Mission San Luis Obispo de Tolosa, the fifth California mission to be established, and then walk a block from the Mission Plaza to stop by the attraction known as Bubblegum Alley. It sounds gross—and to be honest, it is—but it’ll only take a few minutes to walk through the 70-foot alley completely covered in used gum on both sides, and you may as well leave your own mark while you’re there.

The third must-do, if you happen to be visiting on a Thursday, is to peruse the Central Coast-famous SLO Farmers’ Market, where more than 70 local farmers and vendors sell fresh produce and ready-to-eat food (from tamales and crepes to hot churros and mac n’ cheese quesadillas). The downtown shops stay open late for the occasion and there’s also live music on every block, boozy beverages, henna tattooing, and more. The weekly event is the best way to immerse yourself in San Luis Obispo’s small town culture. 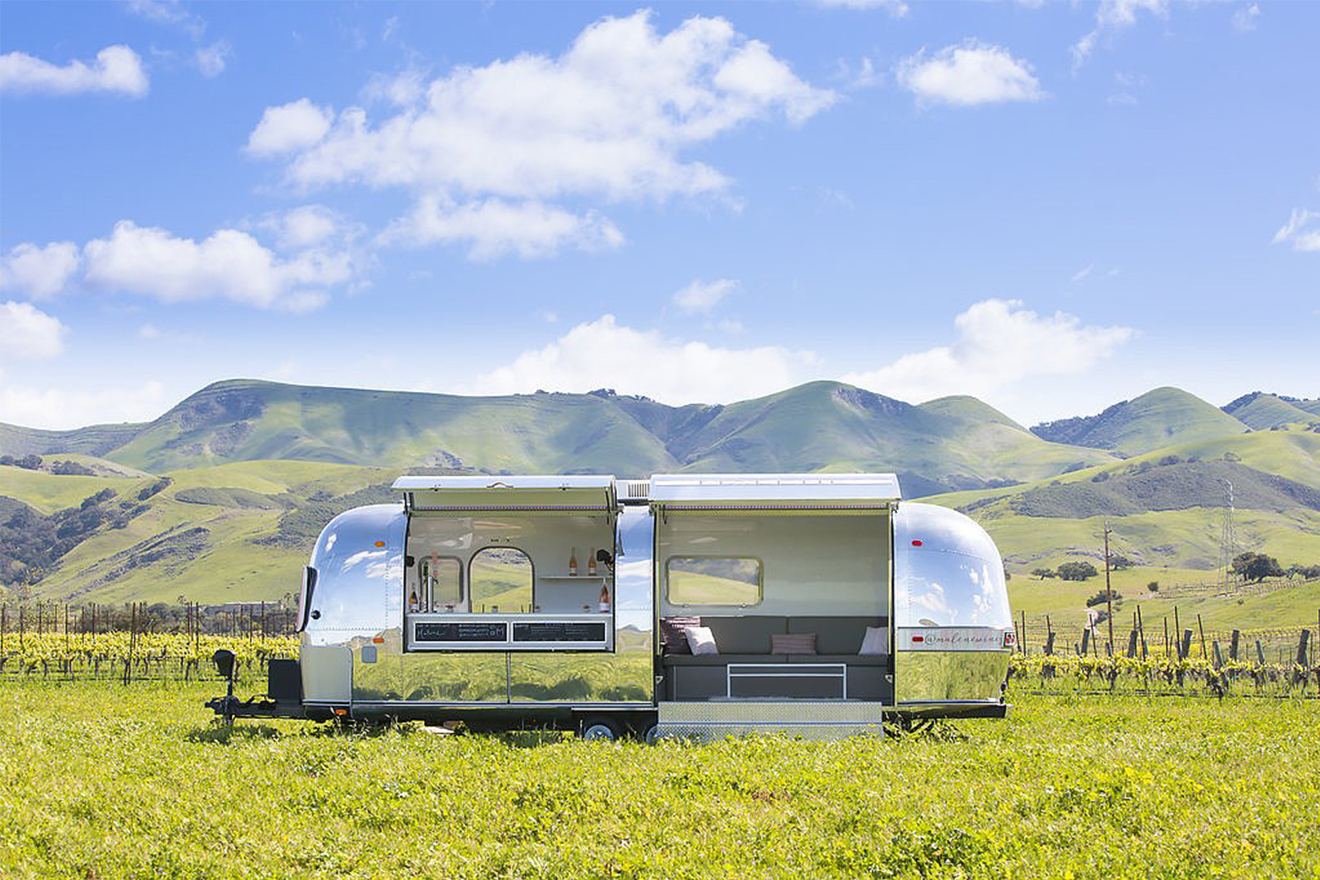 The Central Coast is also home to a world-class wine growing region. While nearby Paso Robles is perhaps more well known, the Edna Valley AVA, where you can sample some premium chardonnay and pinot noir, happens to be only 10 minutes outside of San Luis Obispo—and slow it is. As California’s region with the longest growing season, these wines benefit from a longer hang time in the vineyards and develop intense and complex flavors.

There are dozens of wineries to choose from, but we suggest starting your wine tasting day at a SLO staple, Edna Valley Vineyard. Crafting wine for more than 30 years, this winery has perfected the art of cool climate chardonnay. Sip casually on their outdoor patio with expansive views of vineyards and the Islay Peak volcano. Starting in March, Malene Wines will be back serving rosé on tap out of their 1968 airstream, parked adjacent to Chamisal Vineyards‘ tasting room. Chamisal has been around since 1973 and was the first to plant vines in the Edna Valley. Order up a flight on the garden patio overlooking their pioneering, sustainable, and stunning vineyard. Wine geeks will eat up a deep dive into the Edna Valley region at Tolosa Winery. Climb aboard their Vineyard Excursion, which traverses the incredibly diverse, 45,000-acre Edna Ranch, home to 60 different soil types. 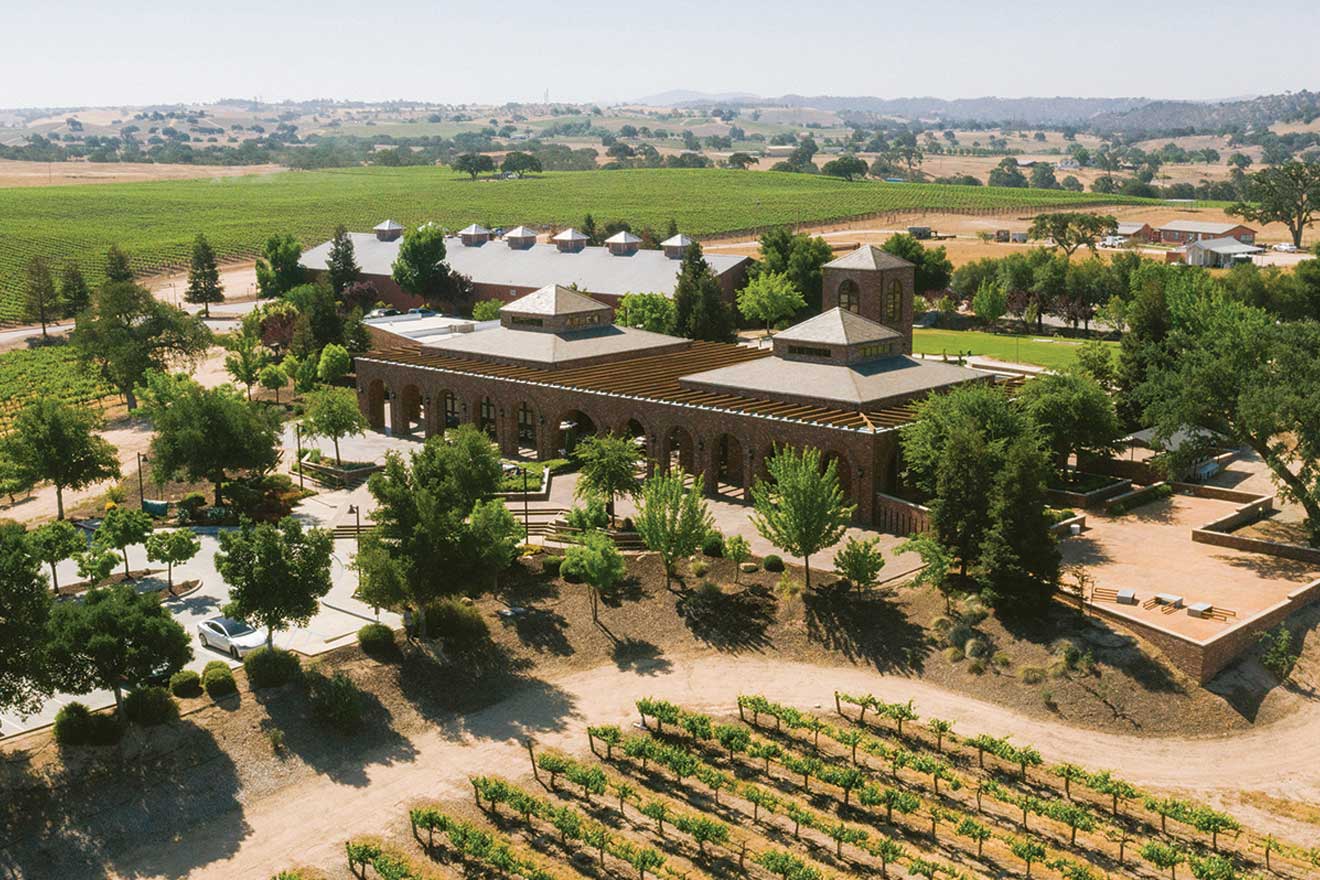 If more wine is what you’re after, you’ll like knowing that SLO is conveniently located within 30 minutes of another world-class wine region: Paso Robles. Don’t miss exploring the regeneratively-farmed vineyards and sampling acclaimed wines from the barrel at picturesque Robert Hall Winery, which also offers a variety of gourmet food pairings worth making room for, or head to the west side of Paso to taste at Daou Vineyards, which sits atop a mountain overlooking the region. 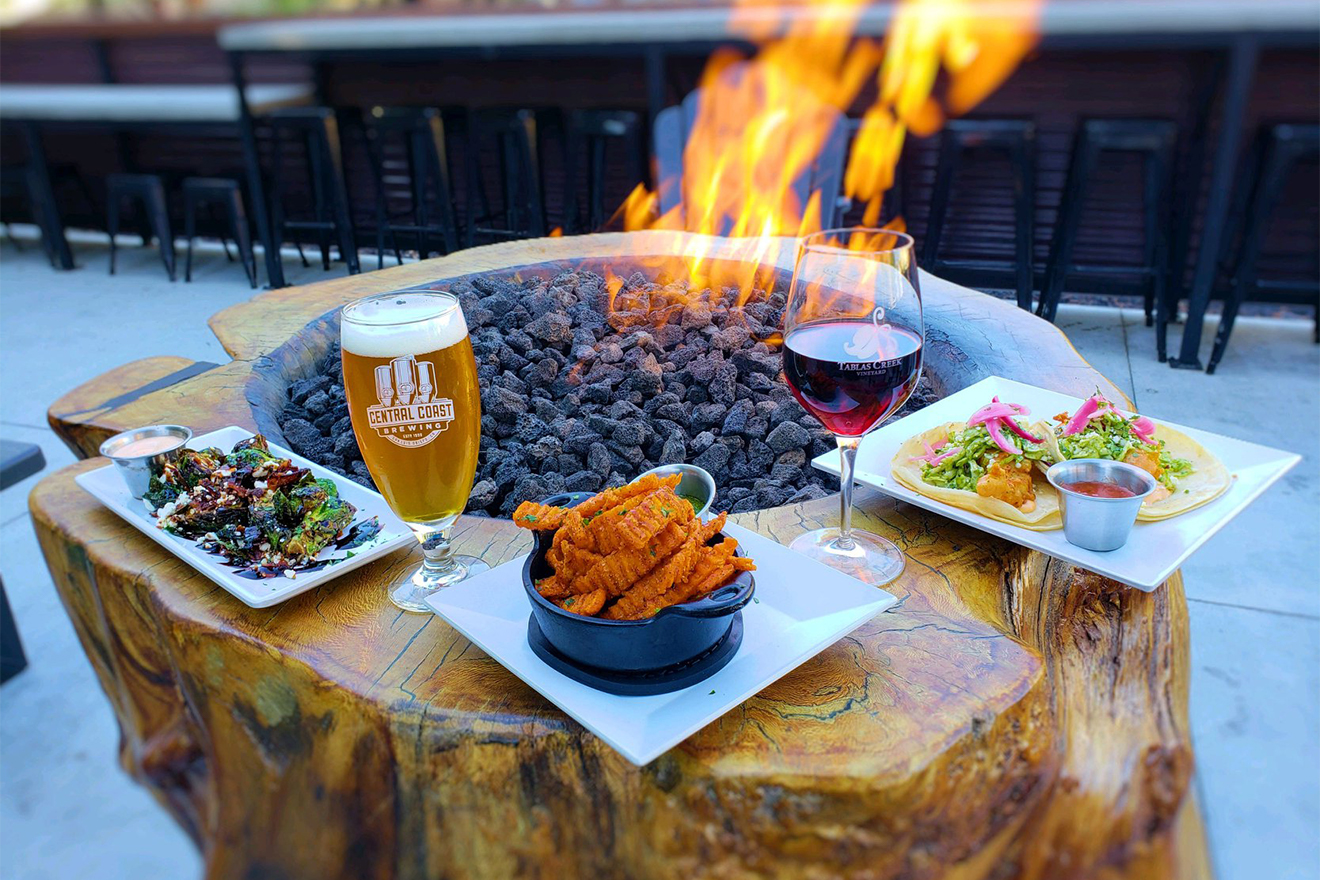 If hops are more your thing, San Luis Obispo has several breweries to sample. Sip your way through Central Coast Brewing‘s 25 taps (like the P-Nut Butter Breakdown, a peanut butter coffee stout) and then embark on a hunt for BarrelHouse Brewing Co.‘s SLO location. Tip: To get there, you have to first step through Mike’s Barber Shop then take the staircase down to the hidden speakeasy where pints are slung within brick walls and 100-year-old exposed beams.

At the center of SLO’s nightlife, SLO Brewing Co.‘s downtown taproom, known as “The Brew,” stays open until 2 am, but they also recently opened a second and larger location, “The Rock,” where you can take a brewhouse tour, hang outside by the firepits, and casually dine at their restaurant. Both double as a concert venue, so check their events calendar before you go. 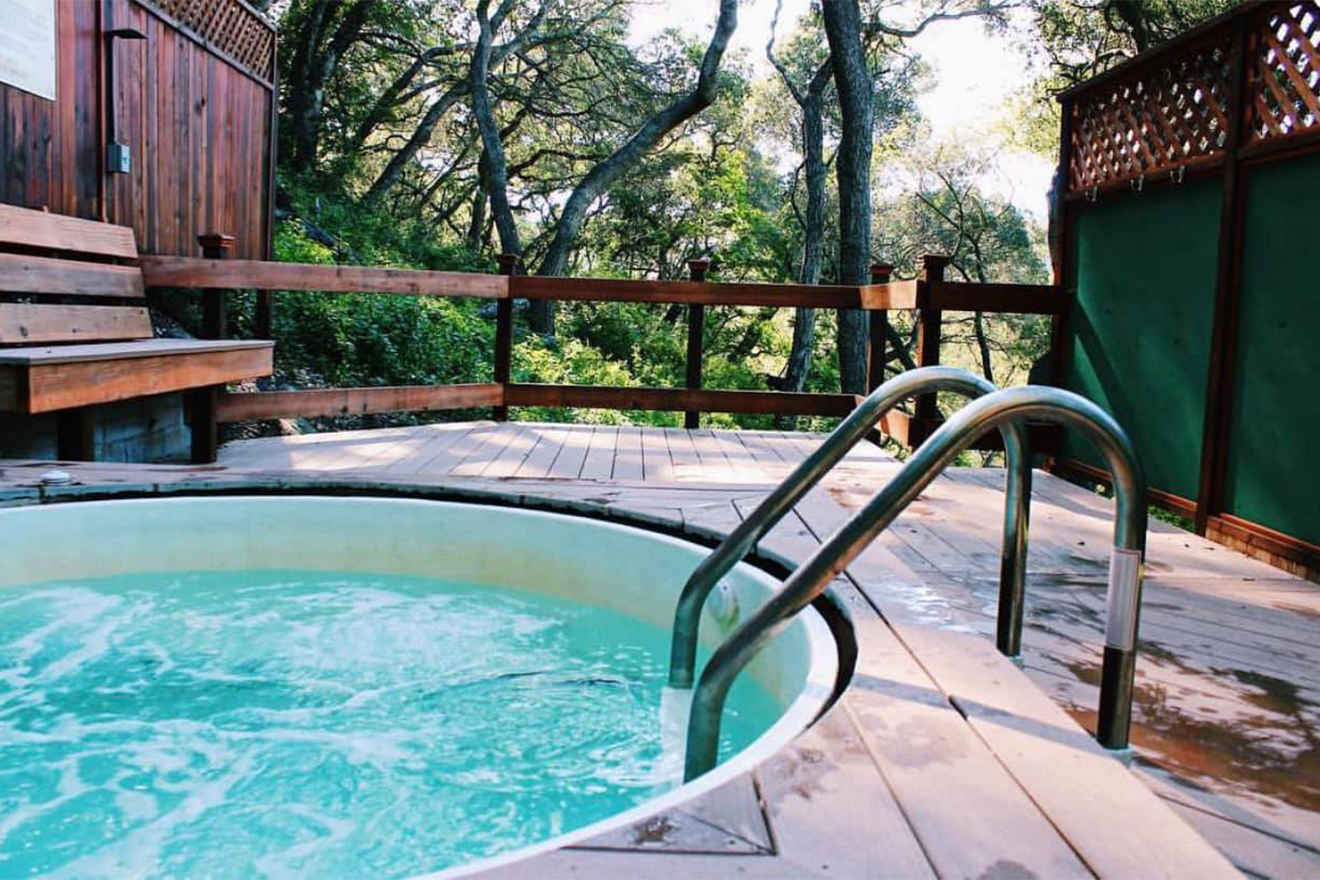 Pack a bottle of wine taken home from your afternoon of wine tasting and book a private hillside hot tub at Sycamore Mineral Springs Resort. Soak amongst the trees and let your worries slip away. For a change of scenery, Pismo Beach is only a quick 15 minute drive from downtown SLO. Take a beach day to stroll the pier, but when you’ve had your fill of relaxation, rent an ATV for an adventurous ride through the sand dunes. A stop at Splash Cafe for a bowl of their famous clam chowder is worth the trip to Pismo on its own. 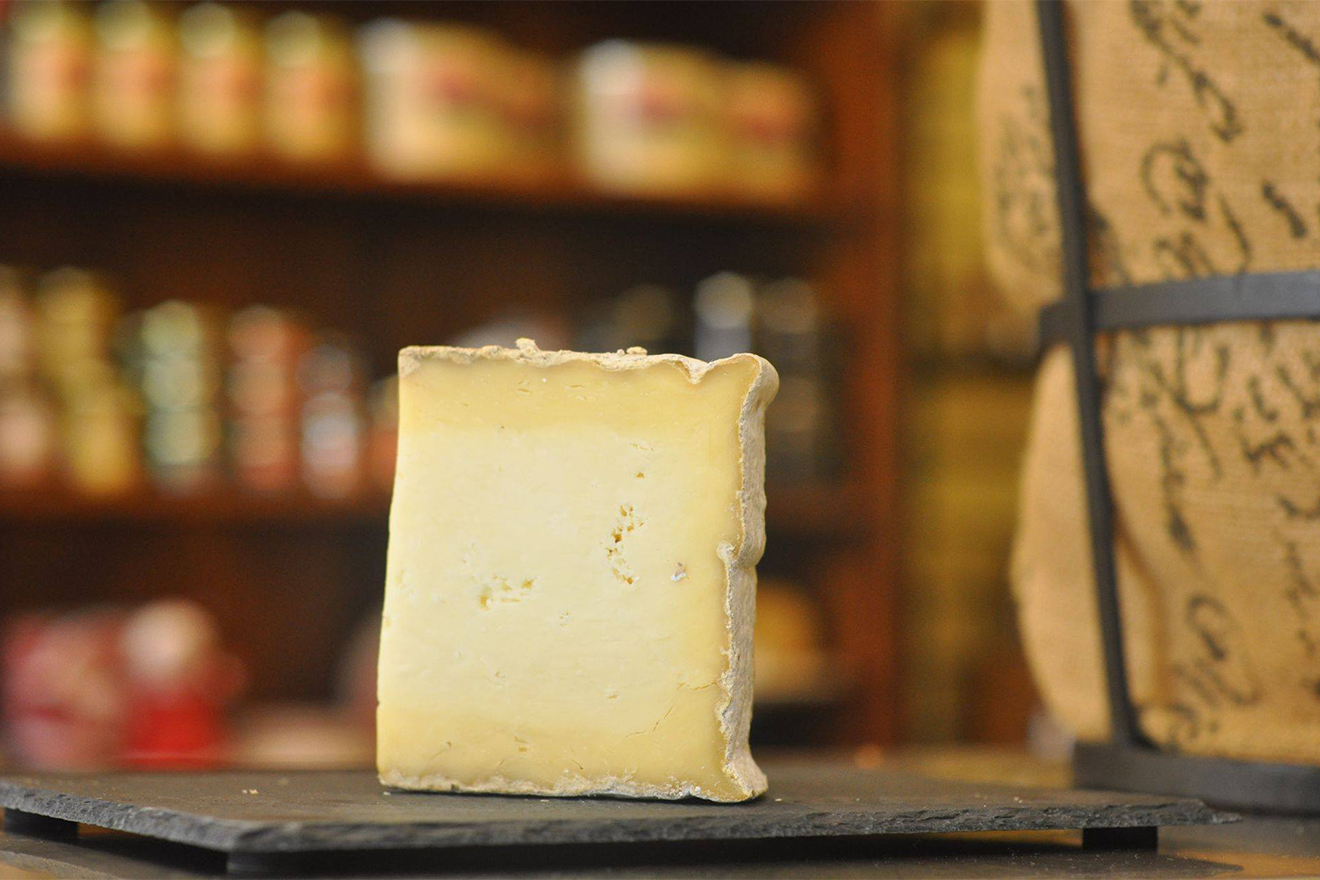 Downtown SLO’s Higuera Street is lined with quirky, independently-owned shops and clothing boutiques. Some of our favorites are the nostalgia-inducing Cheap Thrills, collector of old CDs, LPs, and video games, and Rocket Fizz, a soda pop and candy shop where you can try interesting soda flavors like green apple jalapeno and s’mores. 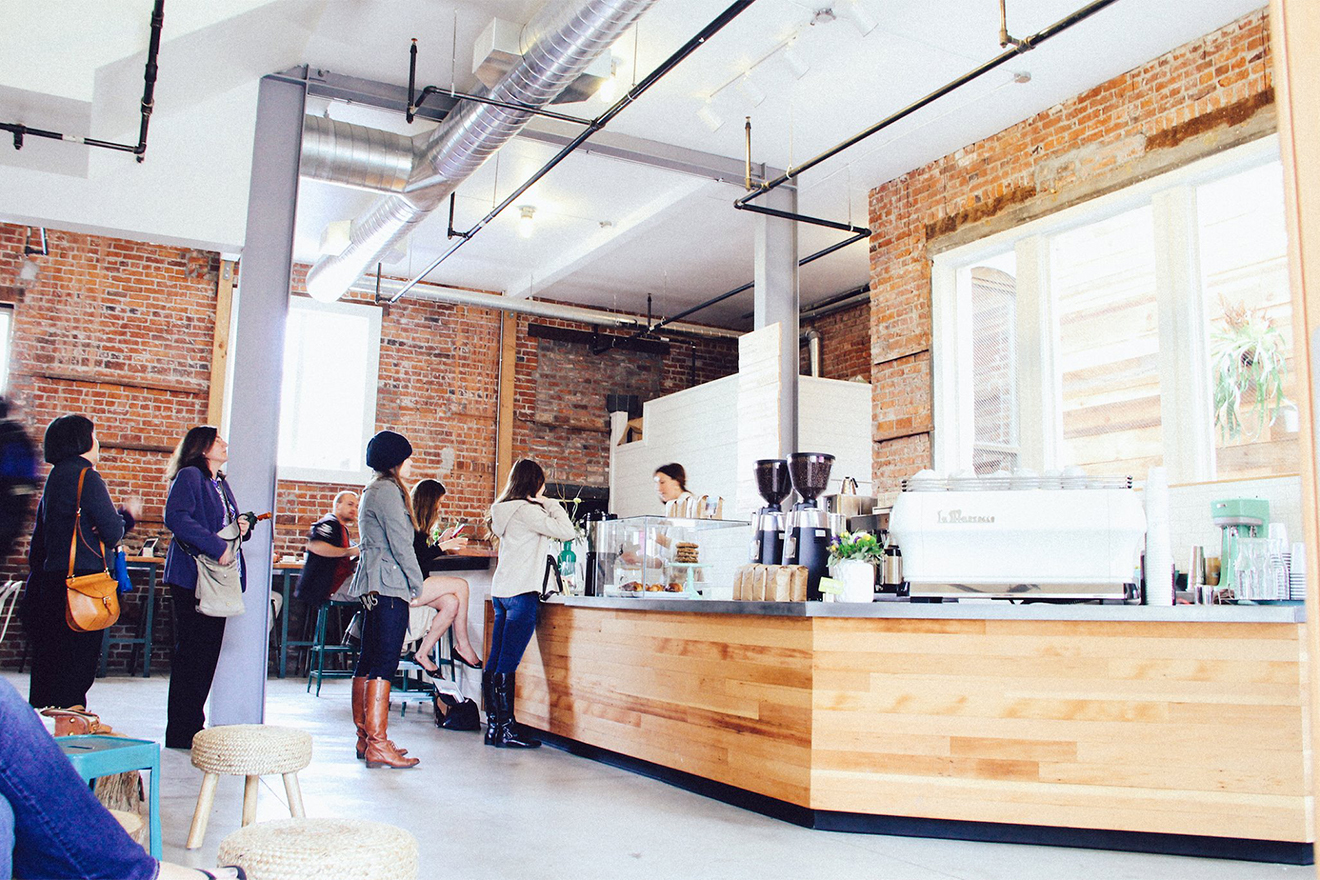 As a college town, San Luis Obispo’s coffee shop game is strong (pun intended) and there are a number of trendy spots to get your morning jolt. Scout Coffee Co. has their own roasting company and two distinctly gorgeous locations in SLO (visit both if you have time). Modeled after coffee culture in Berlin, Kreuzberg has funky names for their blends, like Poor but Sexy, and is the kind of place you could hang out all day and night, for they also sell booze.

Dedicate a lunch on your trip to one of SLO’s most popular restaurants, Firestone Grill. Order up the legendary tri-tip sandwich, cooked on an oak wood grill and served with homemade BBQ sauce. It’s best enjoyed at the end of the SLO Tri-Tip Challenge, which consists of hiking the area’s three peaks (The Madonna, Bishop Peak, and the Cal Poly “P”) and rewarding yourself at the end with a tri-tip sandwich from Firestone. Keep in mind this challenge will take up most of your day.

Though a great food option for vegans and vegetarians, Vegetable Butcher has the goods for meat lovers, too. Sample a slew of seasonal, flavorful, and locally-sourced small plates with an International influence, like Forbidden Sesame Cauliflower and Chimichurri Steak Sticks. You can also grab a quick, yet fresh bite to eat at Mint + Craft. The cafe has a great selection of toasties, salads, sandwiches, and bowls, like the Baked Truffle Mac + Cheese made with crimini mushrooms, gouda, parmesan, and gruyere truffled cream. This is also a great place to pick up a souvenir, as Mint + Craft carries more than 300 products from over 60 artisans. 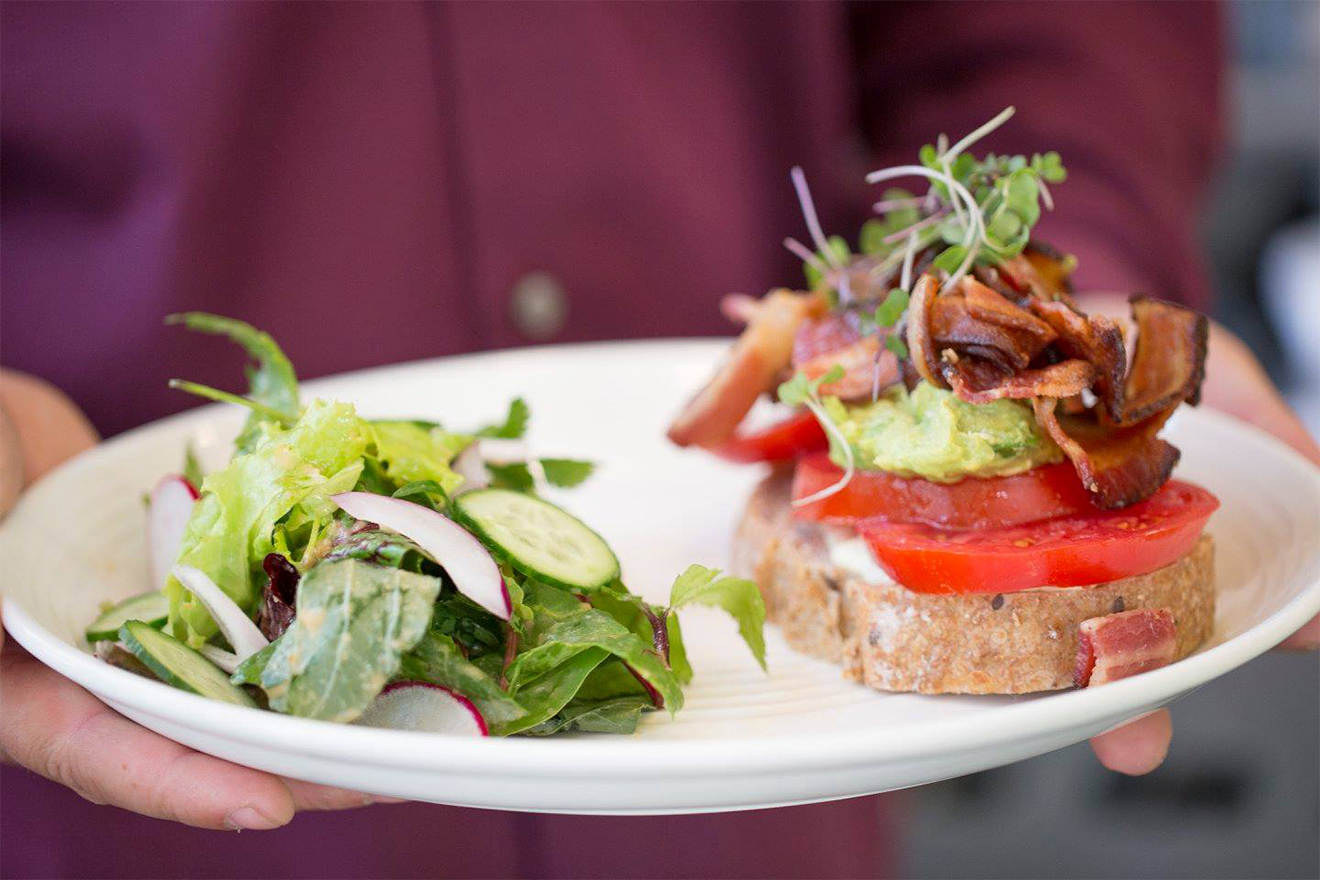 Sidecar Cocktail Company is great for after-dinner drinks—sip classics like its namesake or originals like the Cigarettes & Coffee—and the next day’s hangover brunch. The Classic Bloody Mary can be ordered by the pitcher, while The Caveman Bloody Mary is made with chipotle candied bacon vodka. 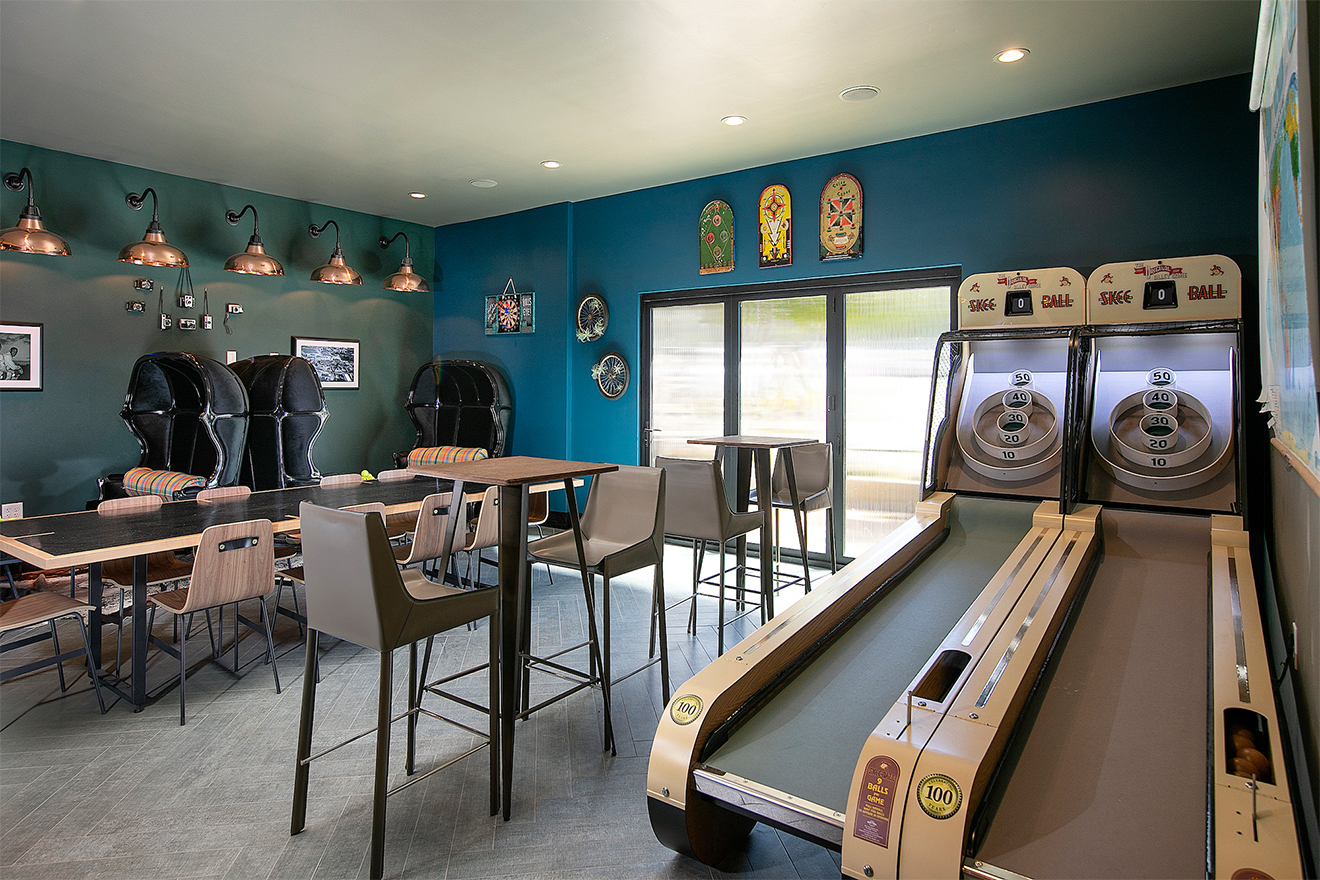 The SLO Brew Lofts offer chic, big city living in a small town (cue Journey’s Don’t Stop Believin’). With only five available, they’re hard to come by, but if you do manage to snag one of these uniquely-designed bachelor pads (with names like The Drifter and Vagabond), you can expect rockstar accommodations with brick walls, bright colors, Crosley record players, and any other amenities you could need during your stay. If the lofts are booked, there are plenty of other hotels, like the brick-walled Granada Hotel & Bistro, which also oozes cool, urban vibes. Beautiful rooms in this San Luis Obispo hotel come with luxurious touches like Persian rugs, marble bathrooms, and seersucker robes. Wind down the day at the on-site Nightcap cocktail bar for Martini Hour.

The Kinney takes you back to school, but not in a bad way. The classic dorm room and its communal areas get a major and modern upgrade in this new boutique hotel that waxes notalgia on the good old college days with campus-themed decor. There’s also a heated pool, spa, and the bar and restaurant, Leroy’s, which offers vintage Skee-Ball. 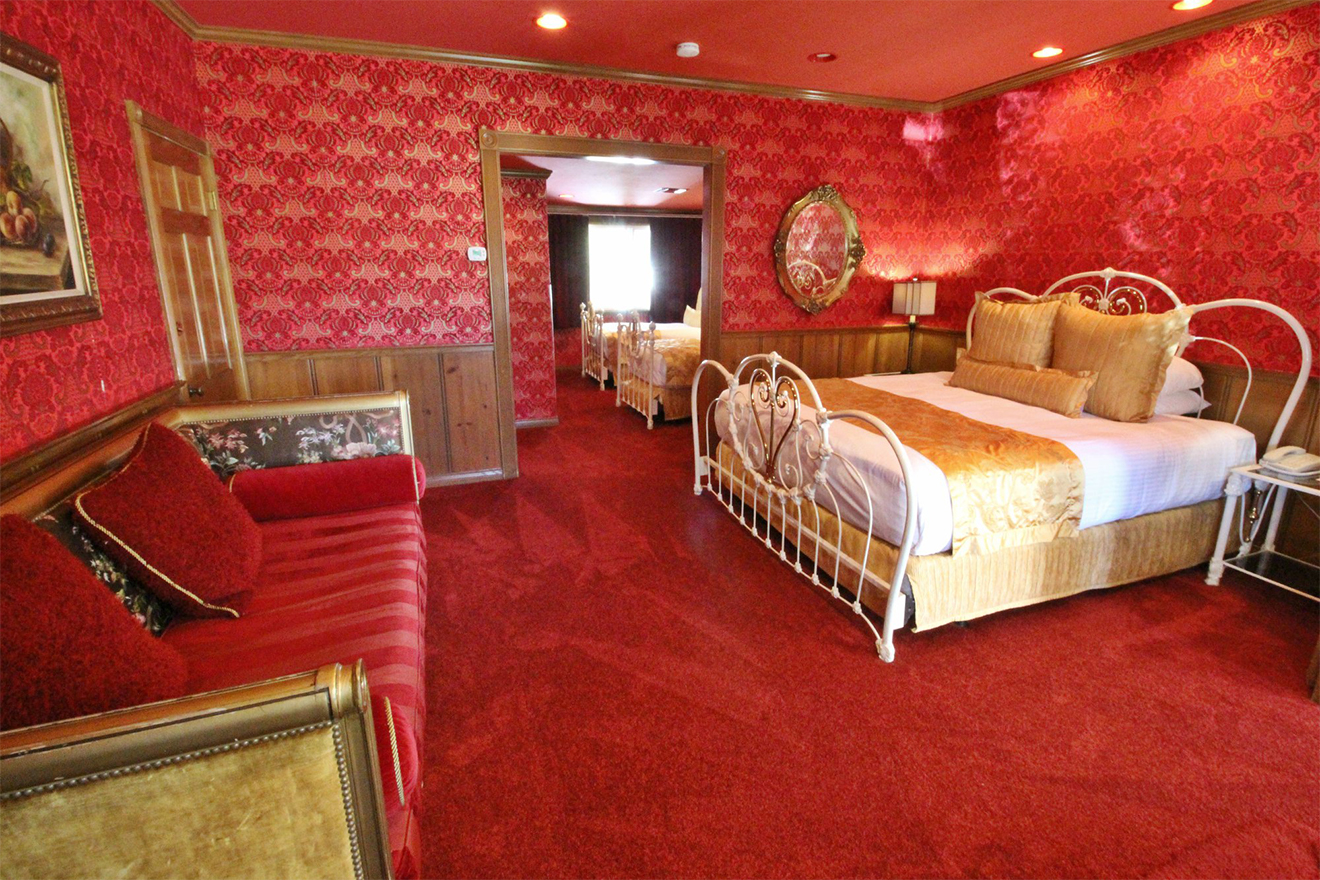 Funky wallpaper, loud colors, and in some cases, rock, cave-like walls characterize the Madonna Inn, a San Luis Obispo institution that’s attracted tourists on the Central Coast since 1958. Choose from 110 totally over-the-top and unique guest rooms and suites with names to match, like Country Gentleman and Time of Your Life.