Tour Germany’s Wine Country: The Mosel and The Pfalz

Although it shares a border with France — you know, the country with some of the most famous wine regions in the world — Germany’s wine industry is underrated and undiscovered. It may forever be overshadowed by its neighbor, but this underdog offers spectacular wine, scenery, and culture that is vastly different from what you’ll taste and find next door.

This is a tale of two German wine regions worth exploring. They have different soils, climates, and mindsets, but both are a quick drive away from the Frankfurt International Airport. The Mosel has received global acclaim for its rieslings and remains firmly rooted in old traditions, while forward-thinking producers of the Pfalz are putting the country’s poor reputation for overly-sweet wines to bed.

Itinerary One: The Mosel 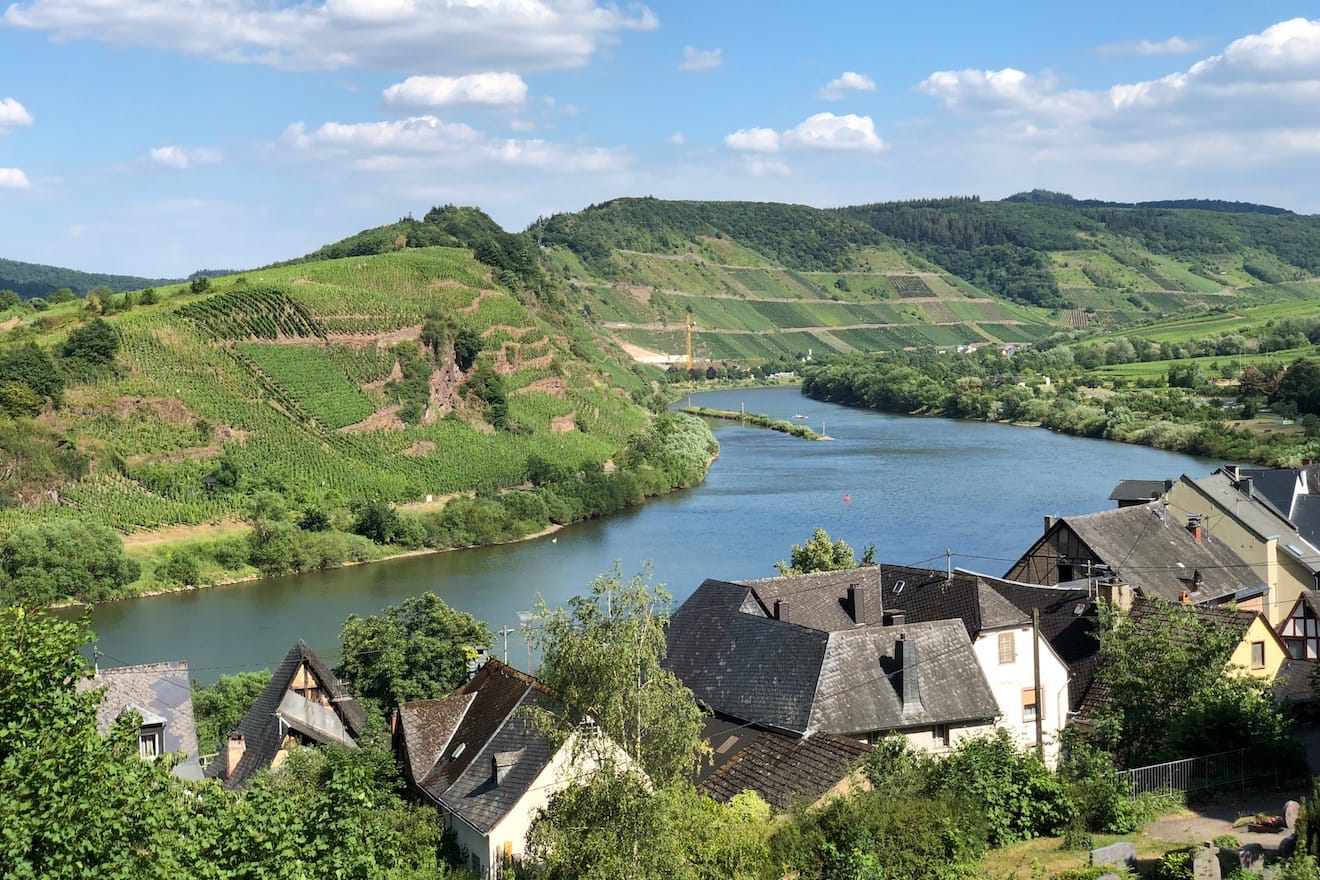 Germany’s Mosel wine region inarguably produces the best riesling in the world, thanks to its insanely-steep, vertical vineyards (some dating back to the early 1900s), cool climate, and unique slate soils that result in an incredible minerality in the wines. Located just a 90-minute drive from the Frankfurt Airport, it’s also (arguably) one of the most beautiful wine regions in the world, where the sloping vineyards and charming German villages are split down the middle by the winding Moselle River. 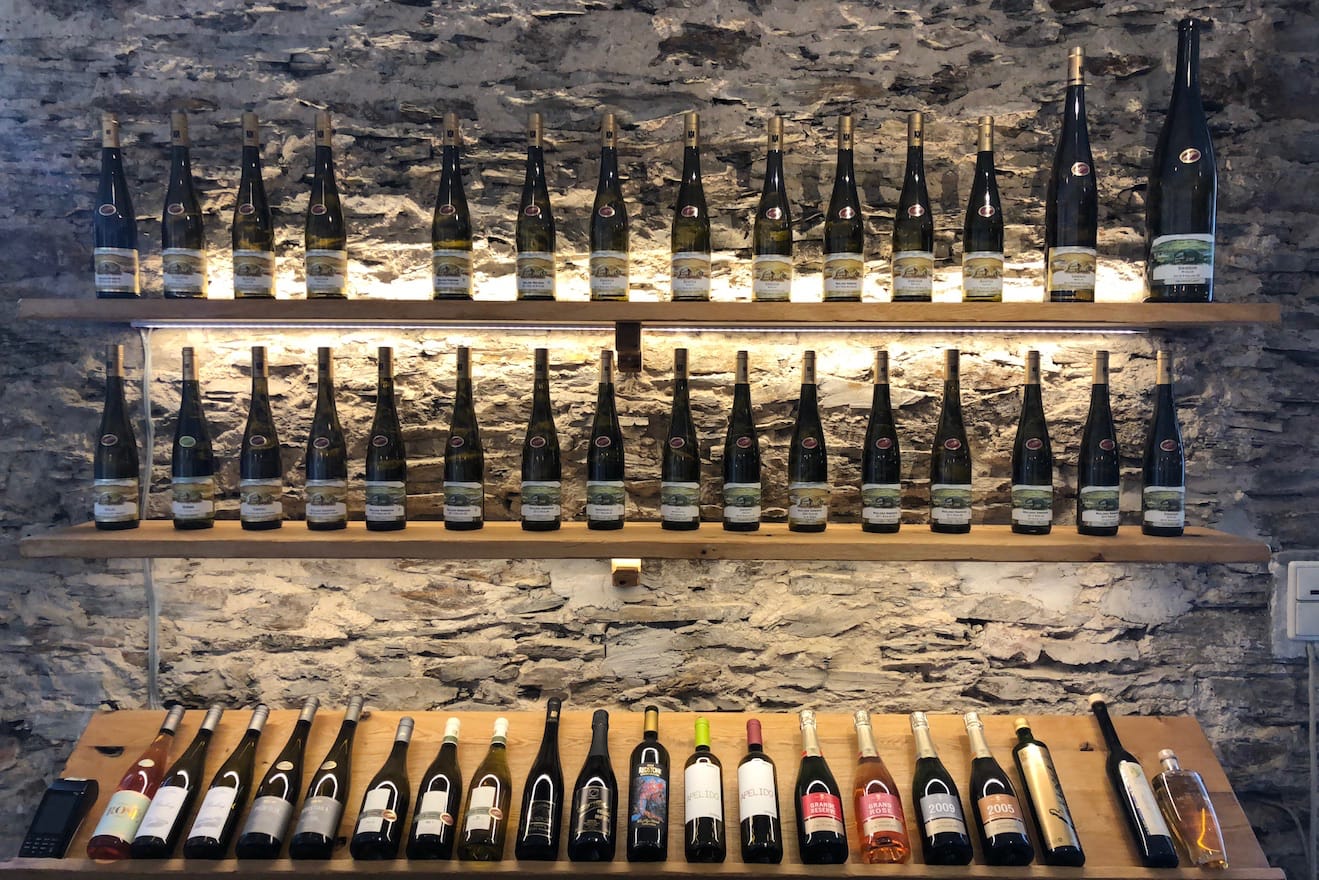 Riesling often gets a bad rap for being too sweet, but Mosel producers, many of which have been around for hundreds of years, are doing their best to change that with extremely refreshing, balanced wines (both sweet and dry with amazing acidity) that can age up to 40 years. Like cabernet in Napa, riesling is no doubt king here, but other Mosel wines include pinot blanc and pinot noir.

The main growing region here is known as the Middle Mosel, or Mittelmosel in German, and that’s where you’ll want to be when tasting. We suggest basing yourself in the town of Bernkastel-Kues.

This winery opened a brand new tasting room in 2018. One of the most modern facilities in all of the Mosel, a wall of windows looks out at the famous Ürziger Würzgartenvineyard, from which you will taste many wines during your visit. Selbach-Oster has been in the same family for more than 400 years, but proprietor Johannes Selbach is very forward thinking and thus more willing than most Mosel producers to implement new-world technology and practices. Ask about tasting the gewürztraminer; a passion project of Selbach’s, it’s the only one you’ll taste in the whole region.

The Prüm name has wine roots in the Mosel that go back to the 1100s. Since 2011, the winery has been run by its first female owner (and winemaker), Saskia Andrea Prüm, who if you’re lucky, will host your tasting. With side-by-side pourings through a diverse lineup of wines, you’ll be able to smell and taste the differences between vines grown in the Mosel’s blue, gray, and red slate soils. Take a peak in the 1920s cellar before you leave.

Markus Molitor is at the forefront of a new era in the Mosel focused on quality; they’re committed to precise vineyard and winemaking techniques that produce high-end wines with intense structure, freshness, and elegance. Only a handful of decades old, Markus Molitor seems like a baby, but brings eight generations of family winemaking from just a few villages down into play. They are also one of the largest wineries in the region: Markus Molitor owns 100 hectares of vineyards from 15 different sites (most possess just a couple of hectares) and produces 60 different wines. 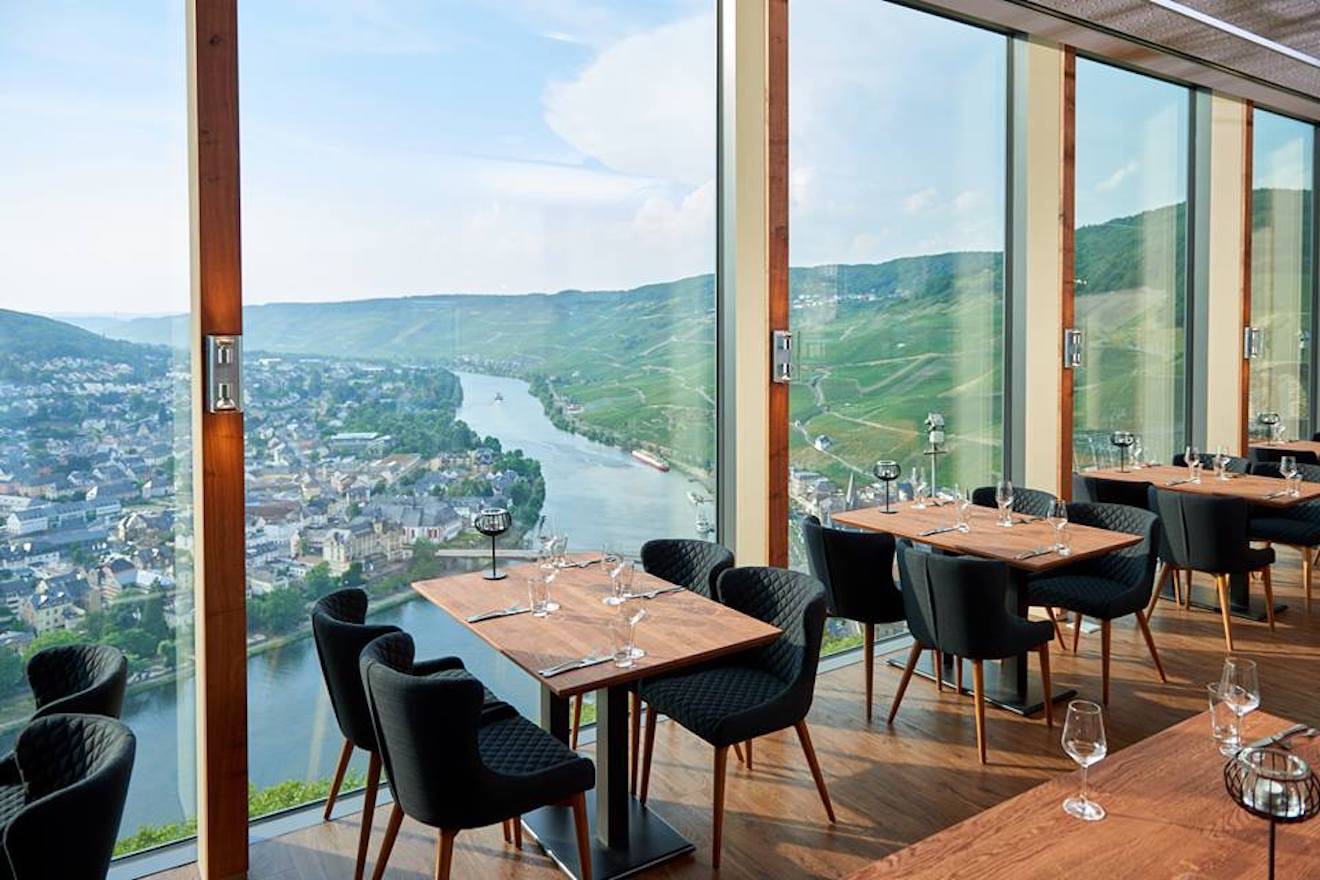 Zeltlinger Hof, tucked back in the charming village of Zeltingen-Rachtig (a few minutes from Bernkastel) is a local-favorite spot for proper schnitzel (a traditional German dish, it’s tenderized, breaded, and fried meat). They’re also known for having the best wine list around with plenty of older, perfectly-aged vintages of riesling to try.

Pretty much every town in the Mosel Valley has a castle, or what’s left of one, and a brand new restaurant opened up this year in the ruins of a 4th century castle in Bernkastel. Burg Landshut is not so easy to get to; you can take a shuttle bus, but most prefer to work for their meal with a steep, 30-minute hike from the town’s market square to the top. The incredible views of the river and valley below will be so worth it.

When seeking a snack or dessert, walk across the bridge in Bernkastel to Eiscafe Venezia. Here, you must order the Spaghettieis. A German specialty, it’s a vanilla ice cream dish that looks exactly like a bowl of spaghetti. 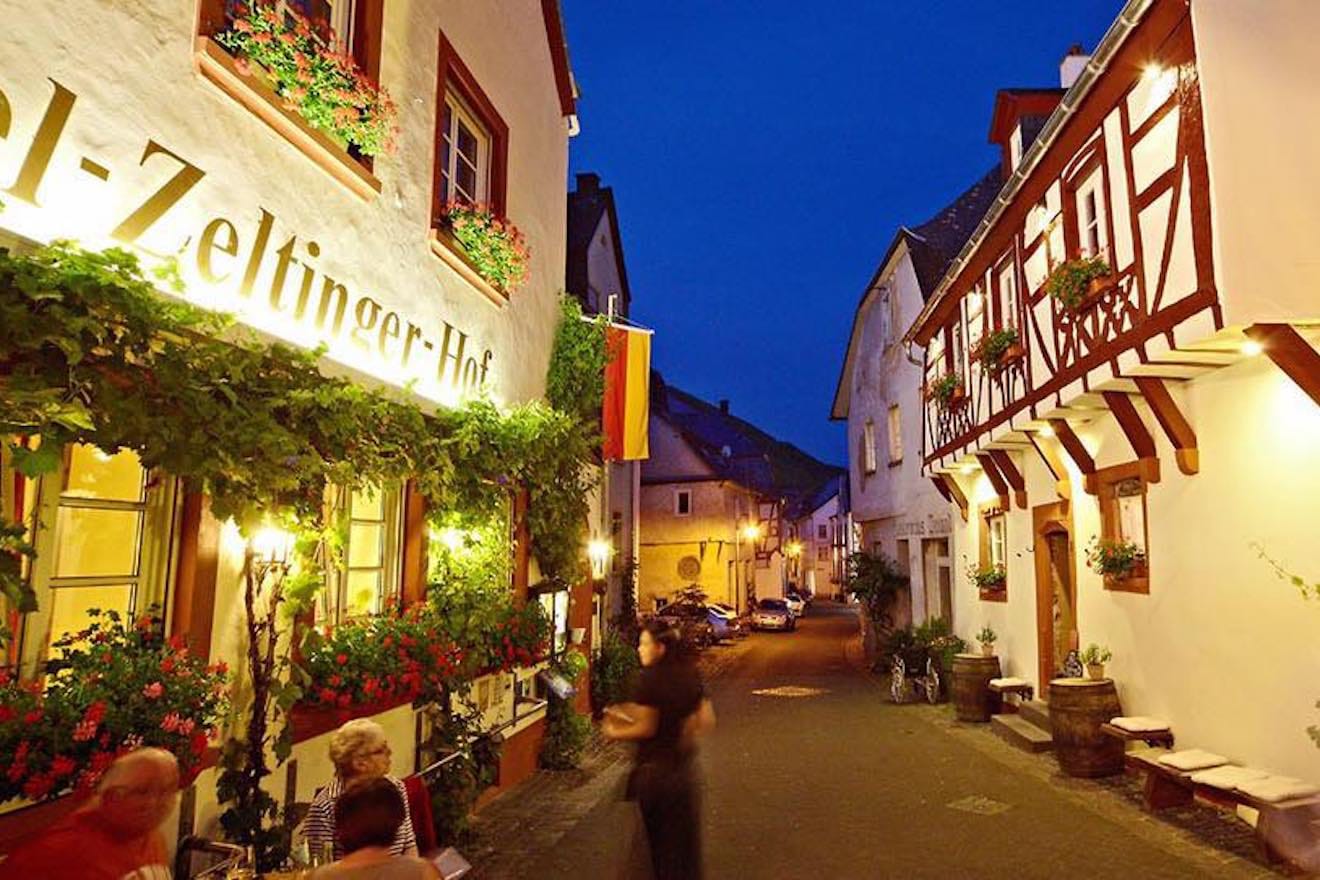 As we suggested, base yourself in the Middle Mosel, in or near Bernkastel-Kues. This will place you in close proximity to the best wine tasting rooms and restaurants. There are plenty of gasthauses, or guest houses, to book, often with their own winery or restaurant attached, like the previously mentioned Zeltinger Hof or S. A. Prüm. 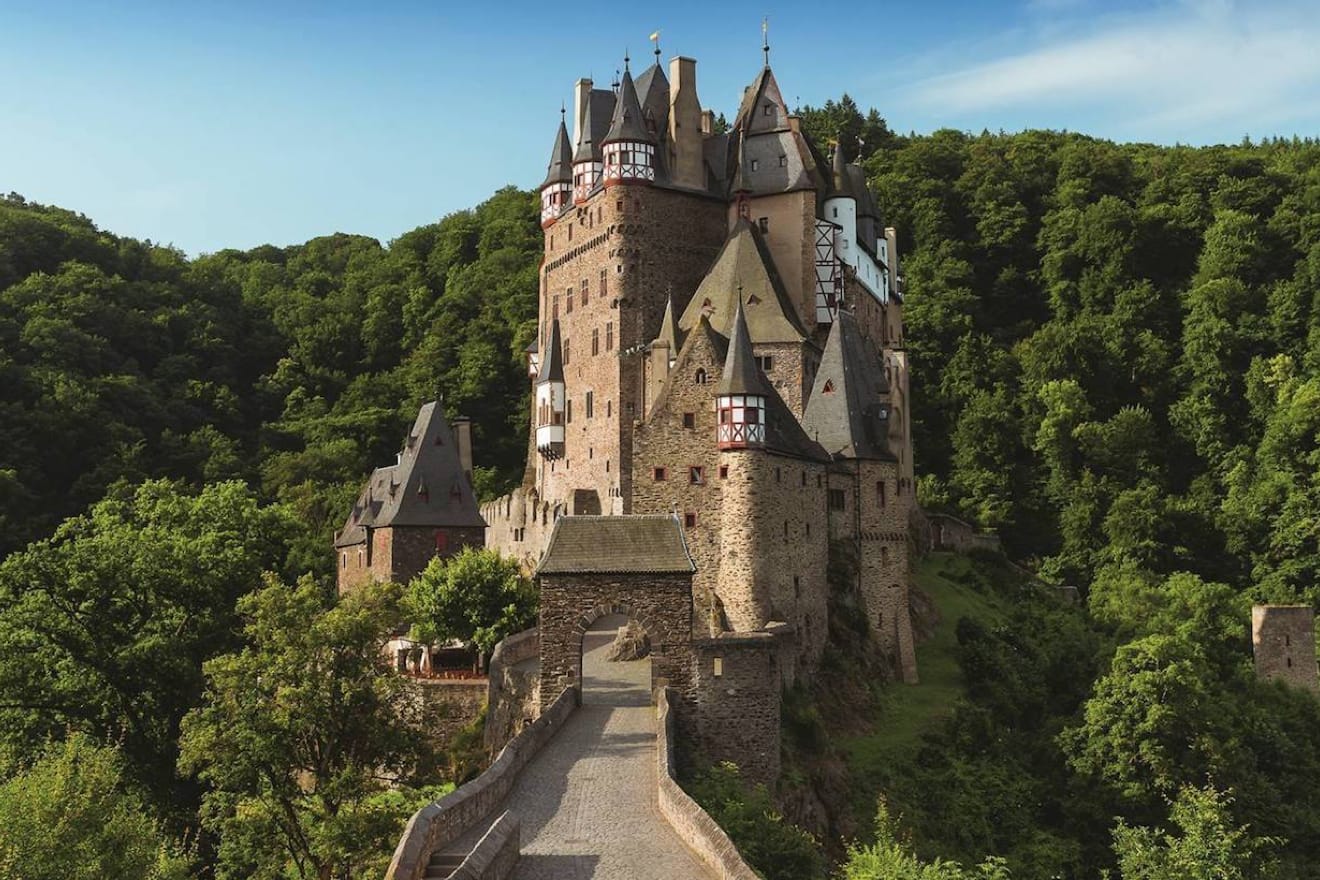 The Mosel is a popular destination not just for wine lovers, but also outdoor enthusiasts. Hikers love climbing up into the steep vineyards and forest (the long-distance Moselsteig Trail extends for 227 miles), while cyclists will often ride alongside the river over several days, stopping in the different towns to explore and taste wine.

Burg Eltz, an 850-year-old castle hidden within a forest, is a must-visit. The castle is farther north, so on your way back to the Middle Mosel, stop in the town of Cochem, where you can ride a chair lift and take in panoramic views.

There are plenty of opportunities to cruise the river, and if you’re visiting in the summer months, look into attending one of the local wine festivals put on throughout the season by each village. If you crave even more wine, venture to neighboring wine region The Saar. 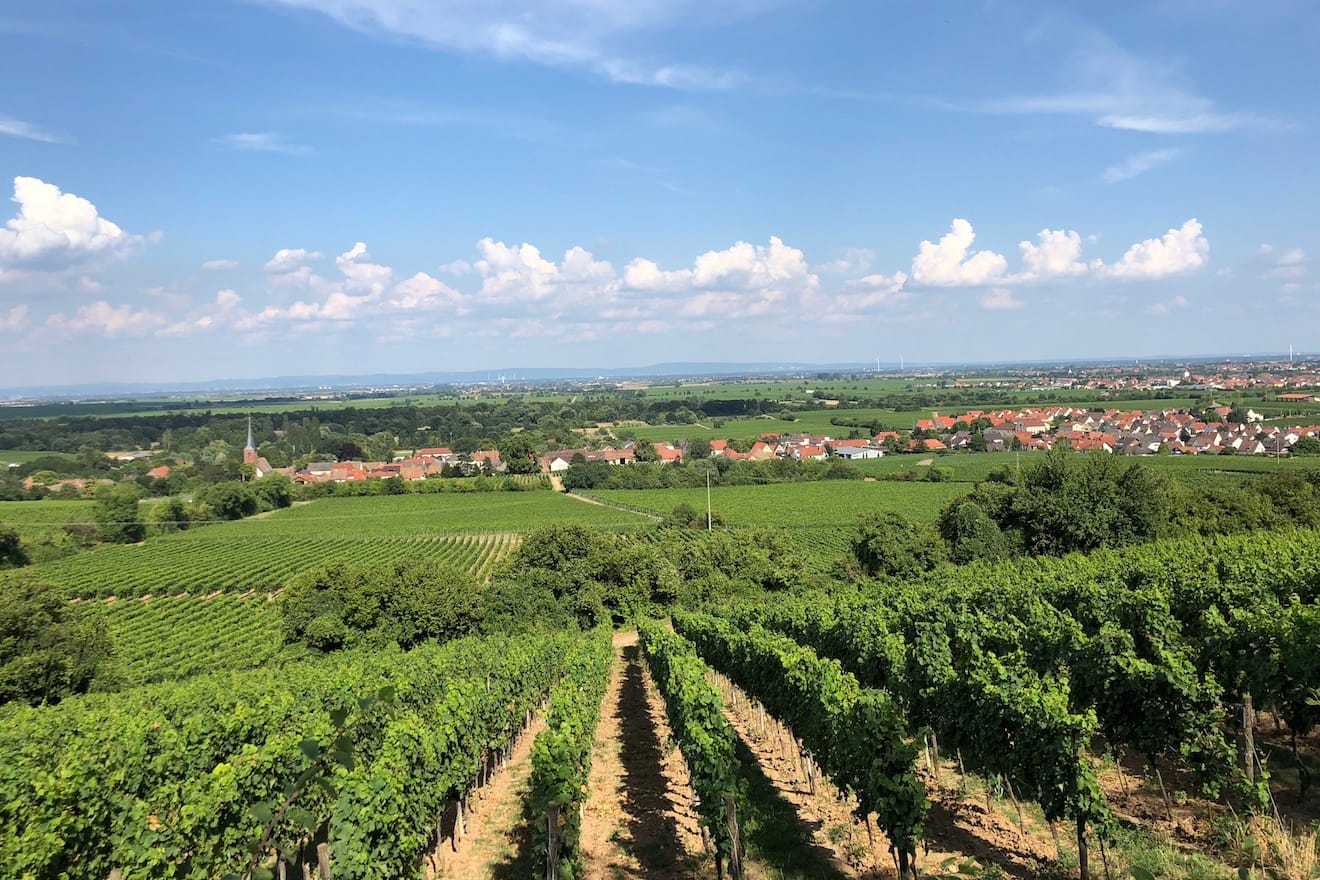 When it comes to beverages, Germany is best known for two things: beer and riesling. But the Pfalz wine region, also referred to as the Palatinate, or by visitors, Germany’s Tuscany, is looking to shake things up.

Located roughly an hour-and-fifteen minute drive from the Frankfurt airport, Germany’s second largest wine region is also one of the warmest in Germany. Thanks to protection by the Palatinate Forest and 2,000 hours of sunshine a year, modern-day Pfalz producers, who incorporate the latest advancements in technology and practice, are moving away from sweet wines in a big way. You’ll still find riesling aplenty (its the world’s largest riesling growing region), but also a true diversity of grapes. 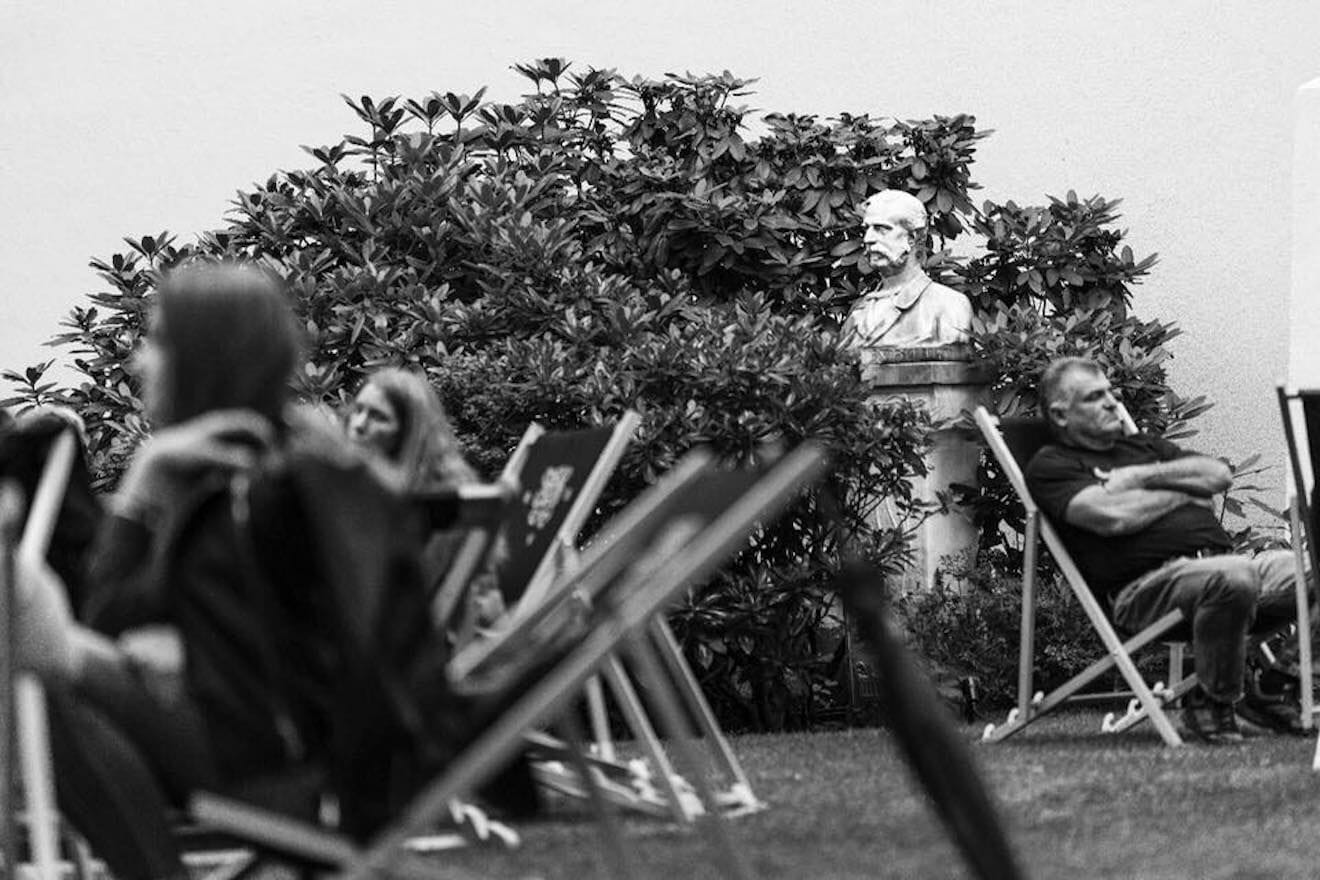 For many Pfalz producers, sweet is so last season. Here you’ll taste a variety of dry wines, ranging from dornfelder, pinot noir, and cabernet sauvignon for red wines and pinot blanc, chardonnay, sauvignon blanc, and scheurebe for whites. Native to Germany, the latter is a relatively new, highly-aromatic white grape.

Sparkling wine lovers must visit Von Buhl. Winemaker Mathieu Kauffmann came to Germany from none other than Bollinger Champagne and uses that experience to craft a spectacular trio of traditional method sparklings (or sekt as it’s called in Germany). He also makes plenty of high-quality, dry, still wines from organically-farmed vineyards — the winery’s tagline is “Dry Wines for Sweet People” — focusing on minerality and elegance.

This female owned-and-operated winery has been in the Weegmüller family for more than 330 years. Winemaker Stefanie Weegmüller was the very first woman winemaker in all of Germany and today, crafts simple, yet beautiful wines that are fresh, bright, and easy to drink. If you get a chance, head down into the cellar to check out her rubber ducky collection.

What’s unique about Jülg is that it sits right on the border of France — literally a hop, skip, and a jump from Alsace — and 40 percent of the winery’s grapes are actually grown in France. The soils here have more limestone, resulting in complex and creamy wines, and you won’t find a single sweet bottling here (winemaker Johannes Julg is quite open about his distaste for them). Be sure to stay for lunch and some authentic German meats in the sunny courtyard. Johannes’82-year-old grandmother and mother run the restaurant, while he and his father oversee the winery operations. 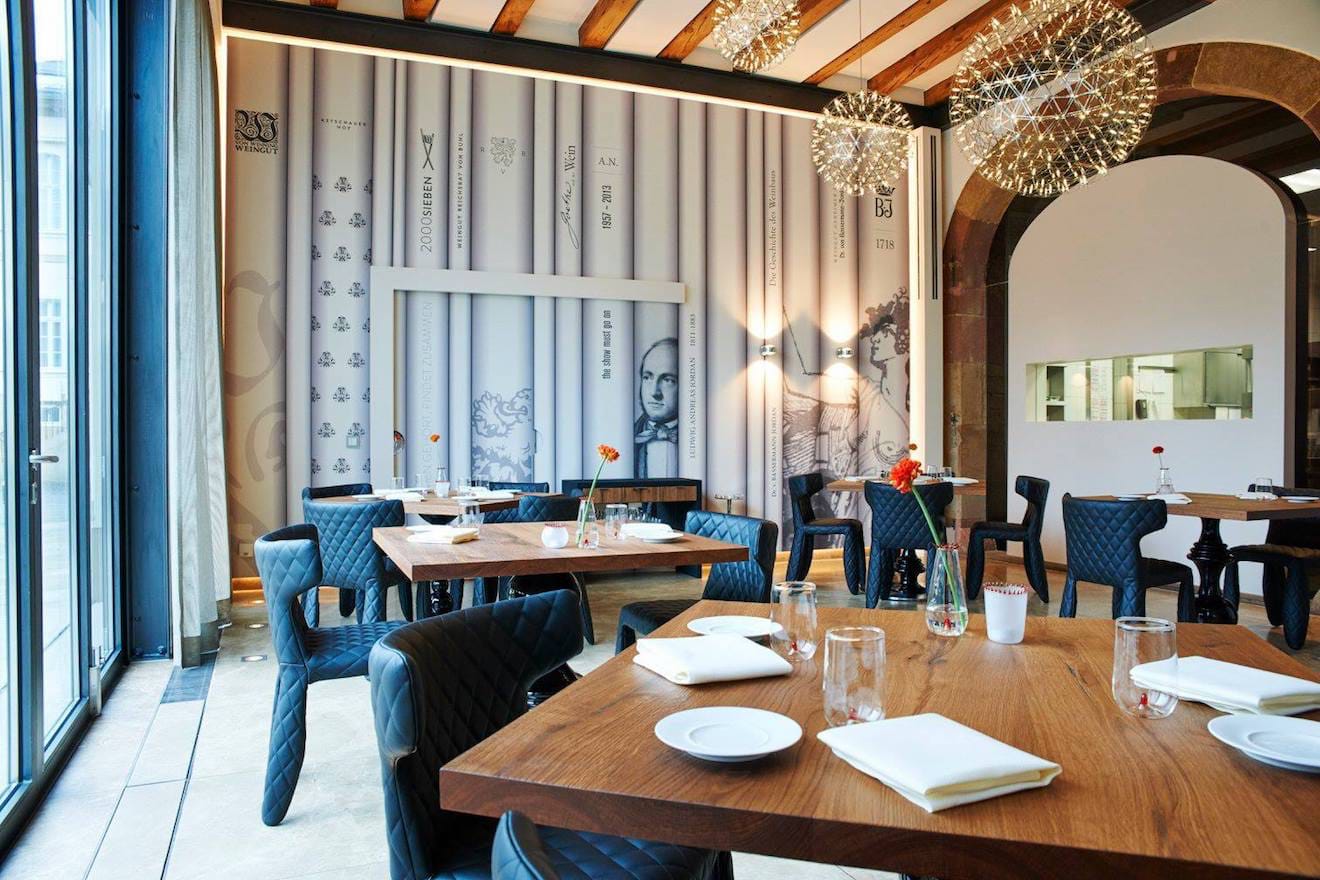 LA Jordan is a posh-modern, Michelin-starred restaurant where the creative dishes look almost too beautiful to eat. If you don’t feel like splurging, the more casual, yet still hip and delicious Restaurant 1718 is right next door. Both have spectacular wine lists and are located at the luxury hotel, Ketschauer Hof.

Owned by winery Dr.Bürklin-Wolf, one of the first in the Pfalz region to implement biodynamic farming, Hofgut Ruppertsberg focuses on seasonal, regional cuisine. Ingredients are sourced from local farmers, plus their own gardens and chickens, which you can see right across the street. Housed in the old stone winery building, the space has the makings of a wonderfully intimate evening. 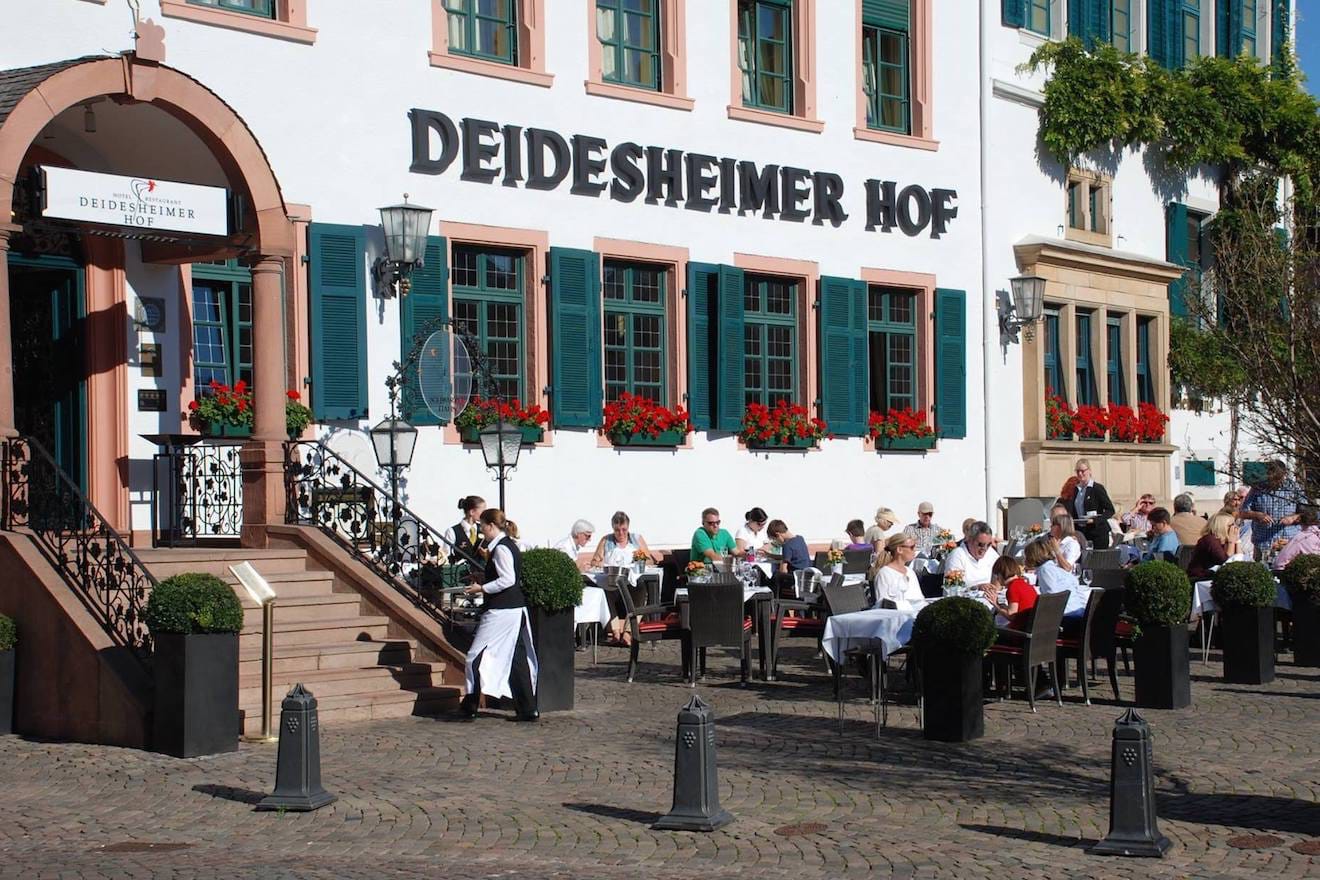 The charming town of Deidesheim is a good home base when visiting the Pfalz. Steigenberger is a moderately-priced resort surrounded by vineyards and nature with direct access to a hiking and biking trail. Deidesheimer Hof is a five-star hotel in the center of town with a popular restaurant among locals. You can even sign up for a cooking class with the resident chef. 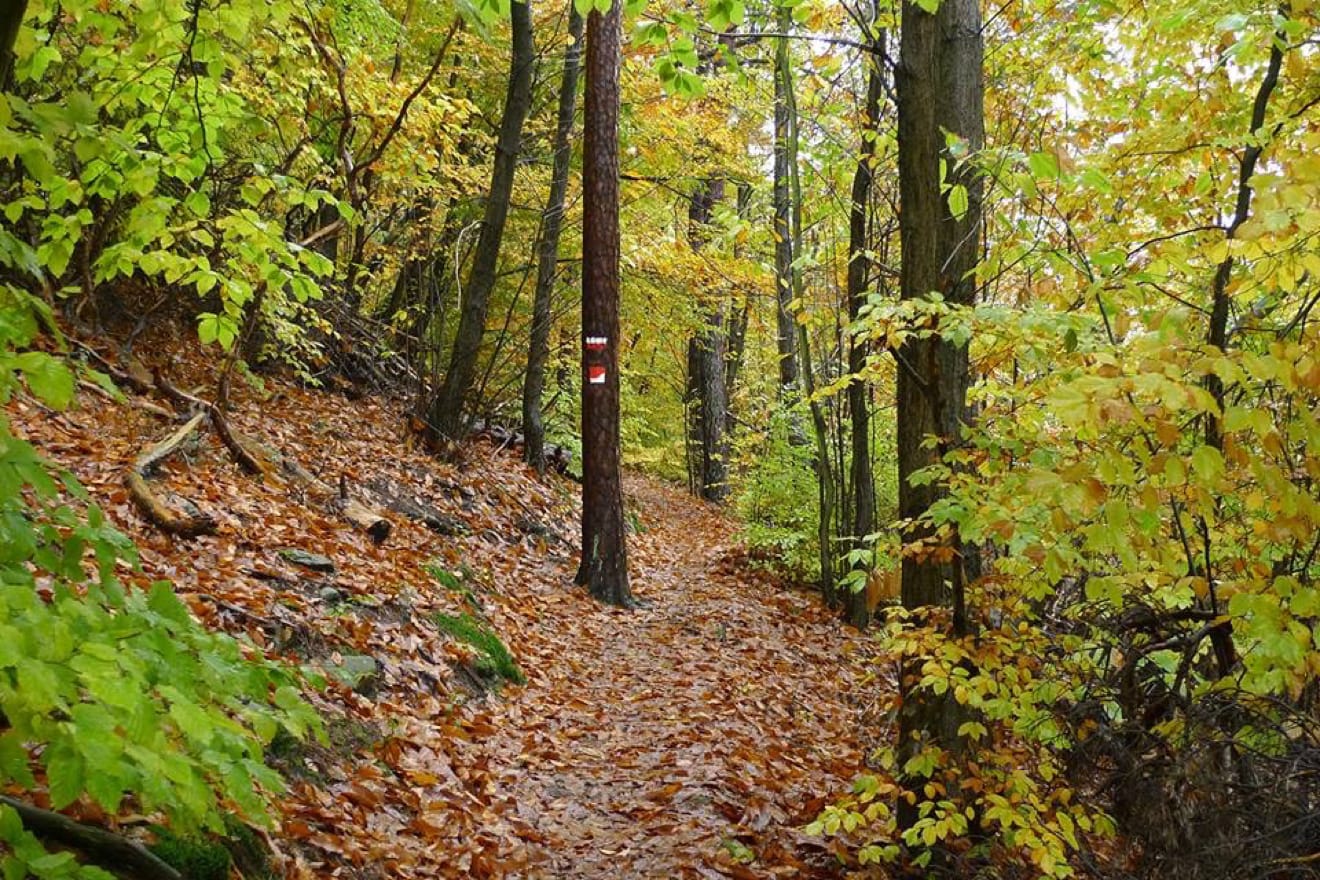 Like the Mosel, the Pfalz doubles as a destination for hikers and cyclists. They have their own long distance hiking trail with 100 forest huts. It’s called Pfälzer Weinsteig, which translates to wine climb.

Take a day trip to Speyer. Located a half-hour from Deidesheim, it’s one of Germany’s oldest cities with a rich history. This is also the site of the world’s oldest bottle of unopened wine, dating back to 325-350 AD.

— THE INSIDE SCOOP ON NAPA VALLEY AND ITS WINES —