Share with your friends
Submit
It’s no surprise that Santa Barbara is one of Hollywood’s favorite getaway spots. But the picturesque details of Santa Barbara are only the backdrop for one of the world’s greatest epicurean experiences, where food, culture, and entertainment blend seamlessly. This guide is only the beginning, but it will be enough to get your gears turning. 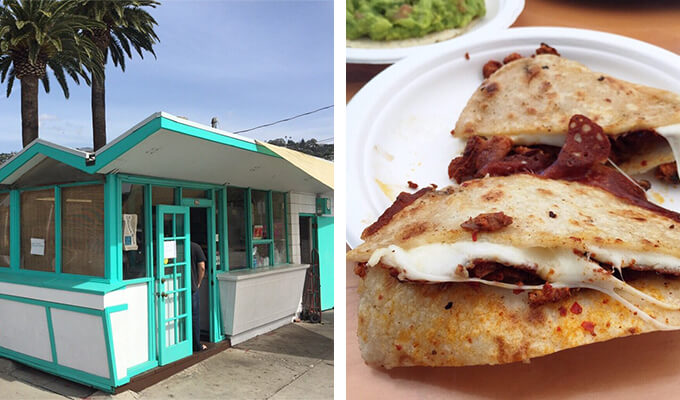 Julia Child famously endorsed this turquoise taco palace in Bon Appetit (back in 1996), and La Super Rica Taqueria still remains a Santa Barbara favorite for both tourists and locals alike. Expect a long line (about an hour’s wait) on Milpas Street, the Mexican neighborhood of Santa Barbara. Though La Super Rica fancies itself a taqueria, there are several other items on the menu worth ordering, like tamales and chile con queso. Most dishes will involve one or two of their fresh, handmade a la minute tortilla’s, so order anything that will have you chomping on one of those.
Insider tip: If you can tempt yourself away from ordering a traditional taco, opt for #16, The Super Rica Especial: a loaded tortilla with fresh poblanos, mixed with a nutty swiss-like cheese and finished off with mouthwatering marinated pork—it’s a local favorite. 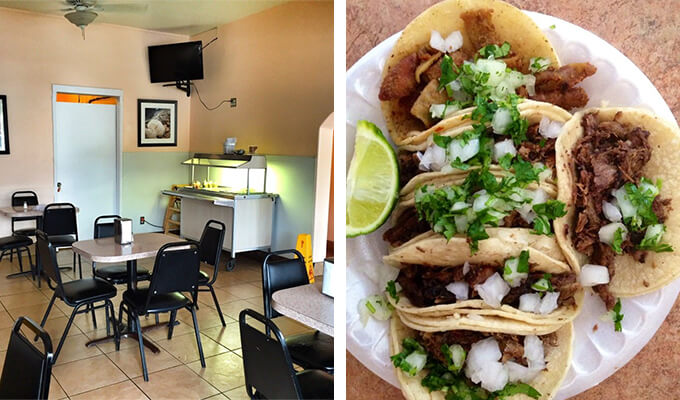 South of Milpas, closer to State Street and a little off the beaten path, is Lilly’s Tacos, a true taqueria with cheap fare and big flavor. Where La Super Rica offers a little bit of everything, the only items on the menu here are tacos. Come armed with cash, though you won’t need too much, since they’re only $1.70 a pop. The menu board, presented in Spanish with English translations, delivers all the usual suspects like asada (beef) and adobada (marinated pork). But if you’re feeling a little more adventurous, give the ojo de res a try—that’s Spanish for “beef eye.”
Insider tip: Don’t walk away from the counter without hitting up the salsa bar first; they have a ridiculous amount of different hot sauces and salsas ranging from mild to “I need a gallon of milk, stat.”

The Hippest Restaurant in Santa Barbara 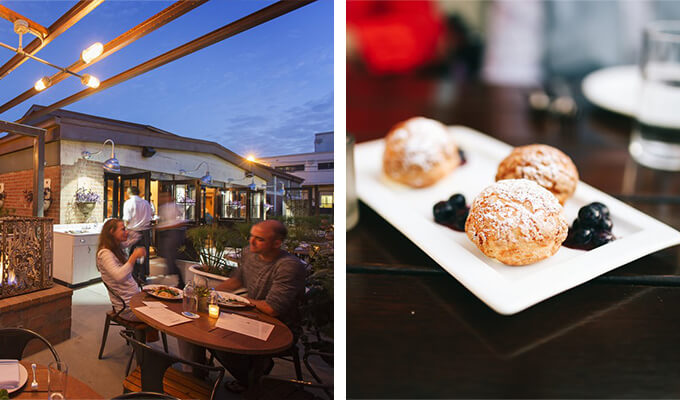 A buzz every night with an energetic and posh crowd, The Lark is Santa Barbara’s hottest restaurant in the cool and lively Funk Zone. With dim lighting, superbly-crafted cocktails, a fabulous outdoor patio, and a former rock and roll chef, the atmosphere is decidedly fun, and the food is amazing (the roasted chicken is a showstopper). But first things first: you’re greeted with complimentary spiced popcorn upon arrival. A ploy, perhaps, to get you salivating and thirsty, for which they have a solution: thirst quenching artisanal cocktails. Ask for the Cutler Stagecoach Whiskey, a cocktail made with local fig jam.
Insider tip: The menu is really inventive, and can be a little overwhelming, so order some deviled eggs with crispy pancetta off the bat, before decision fatigue sets in. 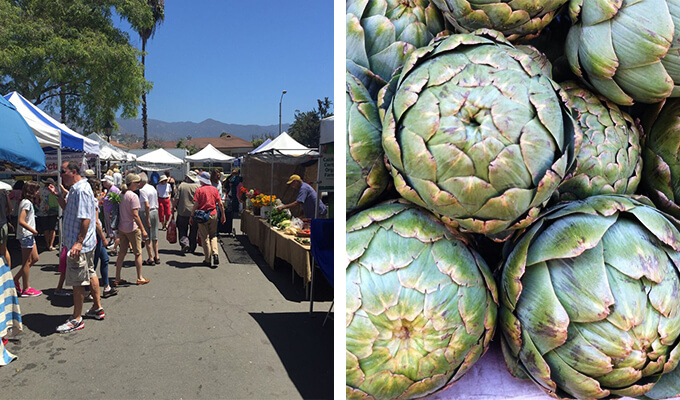 There are a total of six farmers markets in Santa Barbara weekly, but this one, on Tuesdays and Saturdays, may be the best, offering a hefty selection of stands and goodies to oggle over. Grab some pistachios from any of the local booths to snack on in between wine tastings—just pace yourself, as it’s a feast for both the eyes and the stomach. Another bonus is that local musicians keep the market tapping to lively beat.
Insider tip: For the ultimate farmers market experience, Wine Cask Restaurant will take you on the Farmers Market Foodie Stroll with Chef David Rosner. Together, you’ll pick out the ingredients for a three-course dinner he’ll be preparing for you that evening, which you’ll enjoy at the Chef’s feasting bar with wine pairings. 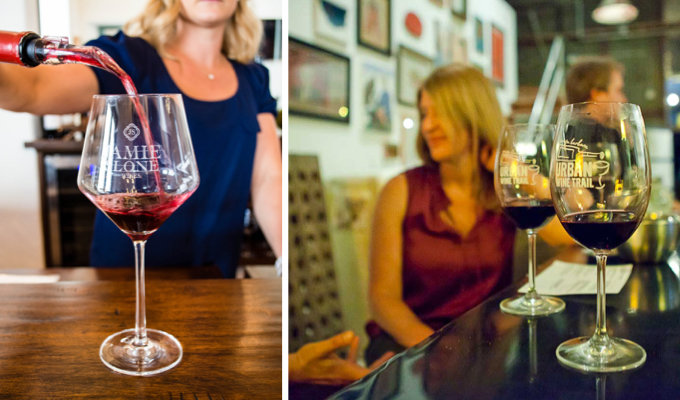 Imagine a hike with no sweating or panting, and stops along the way to quench your thirst—but with wine instead of water. This is the Urban Wine Trail, and it’s definitely a wine lover’s kind of hike. Your “trail map” will consist of wineries and tasting rooms in downtown Santa Barbara; it’s sort of a “choose your own” self-guided adventure—optimal for those who seek a little less structure and scheduling in their “hiking” tours. Pick and choose what looks fun and interesting, and skip what doesn’t.
Insider tip: Be sure to check out Au Bon Climat, the very “ABC” wines that put Santa Barbara on the map. 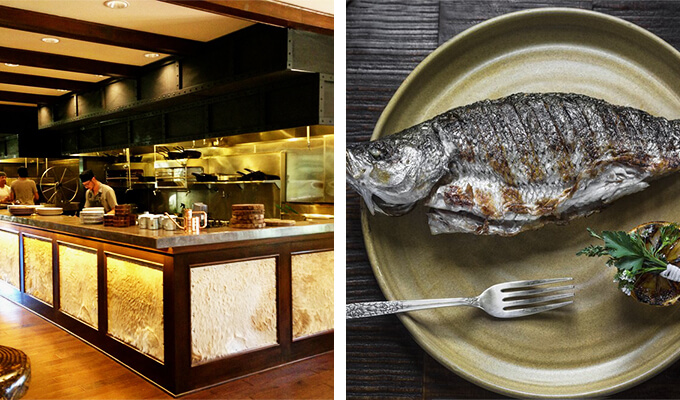 Mattei’s Tavern feels a little less touristy than some of the other eateries, which may be one of the reasons locals love it so much. That, and the food: even the simplest of sharables, like grilled avocado with ponzu sauce, will have you fighting over whose half is bigger. Located in a historical, landmarked building that’s been fully renovated for a more modern feel, this is a dinner that will leave you savoring every bite, so allocate some time to linger. Take note that the wine list is curated by Eric Railsback, co-founder of Les Marchands, who stocks the list with rotating bottles of small-production local wines.
Insider tip: Mattei’s is comprised of several different rooms with various atmospheres, from intimate to boisterous. If you’re looking for a romantic evening, request the room with a table beside the fireplace.

Combining swanky hotels, world-class hyper-local fare, and dynamite wines is always a fragile balance—especially when you consider how utterly laid back the people of Santa Barbara Country are. But that’s why visitors have been flocking to this area of California for decades—to take it all in alongside the beauty of the crashing ocean and rolling hills.