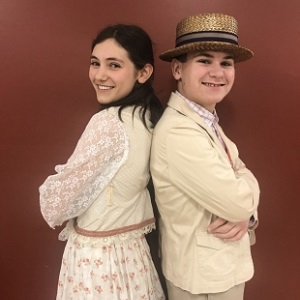 In partnership with Bay Area Children’s Theatre, the City of Pleasanton Civic Arts Stage Company presents the youth musical theater production of Meredith Willson’s ageless classic. Master showman Harold Hill is in town and he’s got “seventy-six trombones” in tow, that he needs to sell, and quick. This fast-thinking, fast-talking travelling salesman plans to con the good folks of River City, Iowa, into buying the instruments and uniforms for a children’s town marching band which he vows to organize. The problem: he doesn’t know a trombone from a toy poodle! And, of course, there is a hilarious love sub-plot: can upright, uptight Marian, the town librarian, resist his overwhelming charms?