Share with your friends
Submit
It seems appropriate that the capital of Texas is located smack dab in the middle of the state, more or less. The founders liked the location on the Colorado River and named it after the “Father of Texas” Stephen F. Austin. It’s a weird blend of casual and sophisticated, red and blue, technology and arts. You can hike, bike, kayak, dance, sing, and wrap it all up with a craft cocktail and farm-to-table fine dining or some of the best barbecue in the state—or the nation, for that matter.

A mecca for film and television production, as well as live music, people have been flocking to Austin from all over the nation to enjoy the scenery and laid-back lifestyle bearing the admonition “Keep Austin Weird.”

If you have just 72 hours to spend, pick a neighborhood or two to explore and plan some outdoor time. With 13 lakes nearby, the Colorado River and more than 300
Parks, Austin is a great destination for outdoor enthusiasts and adventure travelers as well as movie and music fans, gourmands and all manner of “culture vultures.” After all, Travel & Leisure magazine ranked Austin number 12 out of 20 cities for “Best on the Continent” as part of the magazine’s annual World’s Best survey.

Where to Hang Your Hat 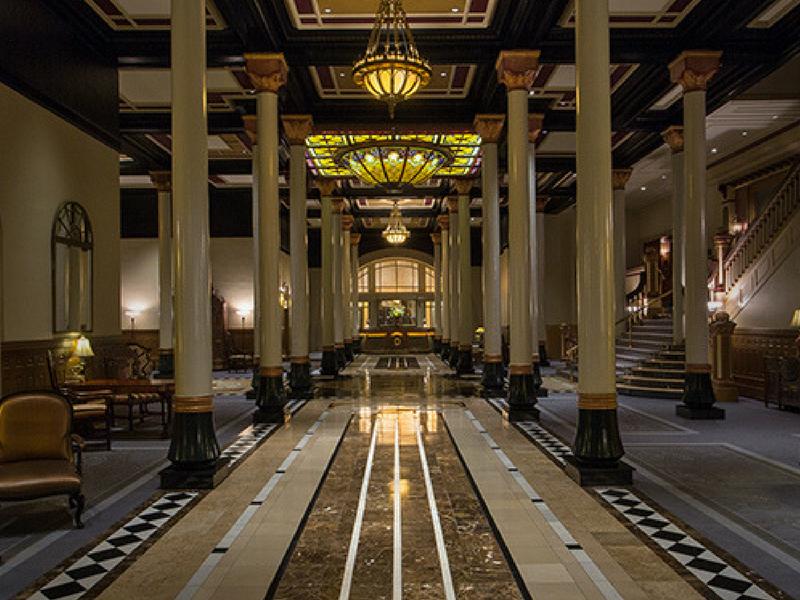 The four-star Driskill Hotel, a Romanesque style accommodation opened in 1886 by compulsive gambler and Civil War Colonel Jessie Driskill, is known for more than its fair share of paranormal activity. The most haunted suite in the building is Room 525. And guests routinely report the wafting scent of Col. Driskill’s cigars as well as the special attention he gives to visiting ladies. Restored to its original opulence, the hotel is popular with locals, Texas politicos and locals alike for its convenient downtown location and neighborhood bar featuring live music six nights a week.
In fact, The Austin Chronicle just voted The Driskill Bar The Best Bar in the City.

Insider tip: The buttery and soul-satisfying cheese soup served at the 1886 Café and Bakery inside the hotel is legendary. 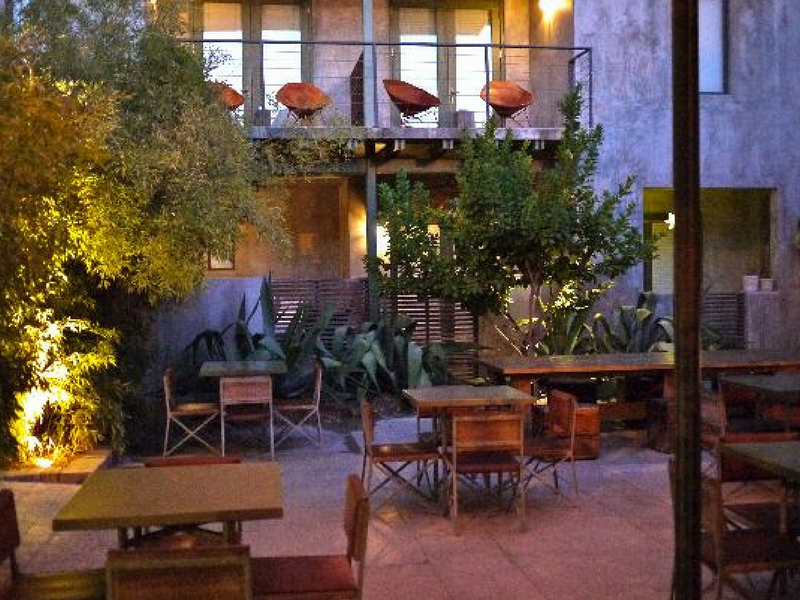 If intimate and authentic experiences are your vacation thrill, Hotel San Jose is for you. This 40-room hotel on South Congress Ave. is quintessentially Austin. Even if you don’t stay there you can, and should, stop in for drinks and music in the lounge. This hotel offers a variety of room styles to choose from, each furnished with carefully curated amenities such as kimono bathrobes, Malin & Goetz bath products, and custom linens.

Insider Tip: Perhaps the best feature of all is spending a relaxing weekend just hanging out around South Congress Ave. pretending to be a local. There’s a certain cache to living the local legend: “Keep Austin Weird.” 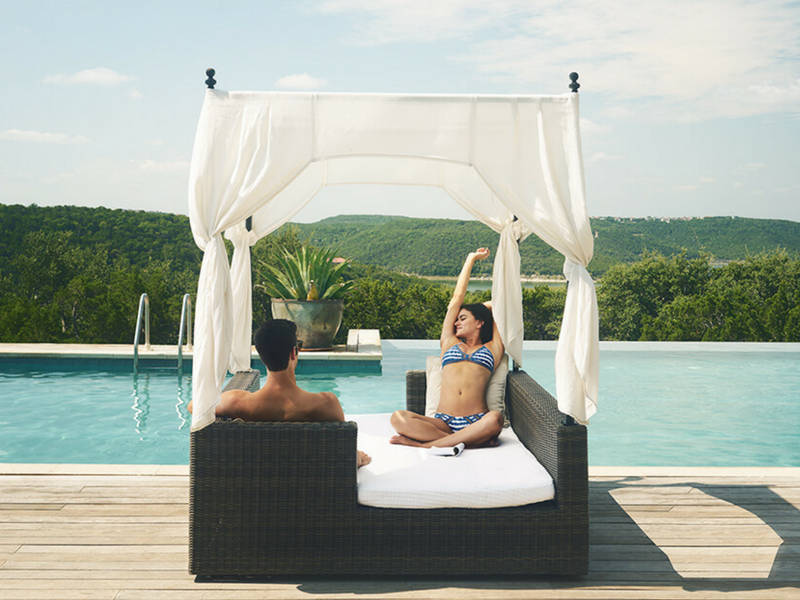 Guests at the Travassa Austin can escape the bustle of downtown, without journeying too far off the beaten path. Enveloped by the rolling Texas hills, Conde Nast Traveler’s Reader’s Choice voted the Travassa a top 100 Hotel in the world in 2015. Experience the Texas Hill Country on your terms – the hotel offers cultural, cooking, adventure and spa activities, along with luxury amenities and Texas-style hospitality.

Insider tip: This is the place to learn to two-step without feeling self conscious on a crowded dance floor. You can then take your new found dance skills out to the Broken Spoke for a bit of boot-scootin’ fun. 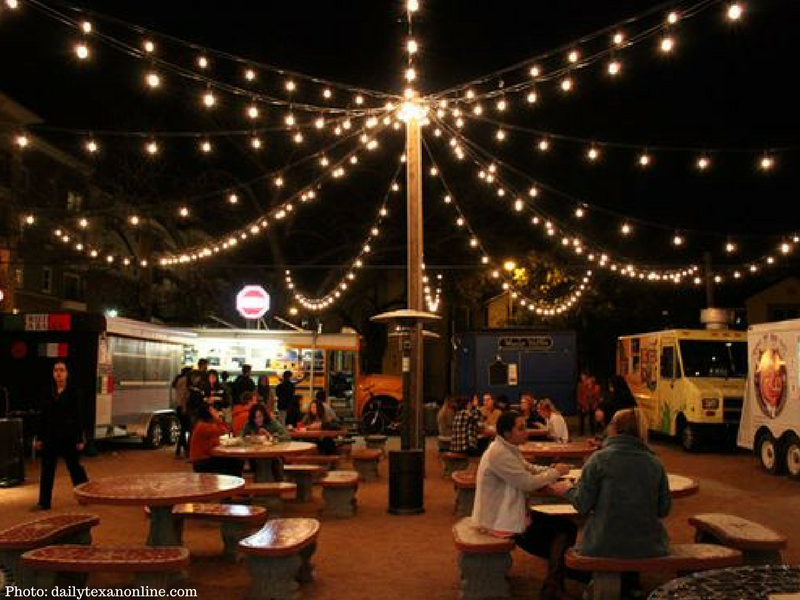 Austin could very well be the nation’s food truck capital. Slinging barbecue, tacos, Indian, and all sorts of culinary fusions, these mobile restaurants continue to earn rave reviews from foodies, cooking magazines, and hungry stomachs from across the country. By going online and mapping out where the trucks are gathered each day, a visitor could easily a-la-carte their way through a whole Austin vacation. Check roaminghunger.com to find the locations each day.

Insider tip: For authentic Tex-Mex tacos and handmade tortillas, the best contender is Veracruz All Natural.

Texas and Thai may not seem like a logical blend, but the chefs at East Side King Thai Kun prove that such a match was made in culinary heaven. The restaurant serves up the heat in its fiery papaya salad or waterfall pork. Family-style dishes include whole fried fish. It’s a great spot to check out after a live show as they’re open until 1:45 a.m. every night.

Insider tip: Grab a cocktail at Whisler’s, the adjoining bar (the tropical Singapore Sling or Thai-inspired Way of the Dragon are some all-time favorites).

The Barley Swine is a foodie nirvana with upscale takes on American classics and an extensive beer and wine menu. Whether serving up a aged beef tartare or a parfait garnished with edible flowers, the chefs at Barley Swine insist on using the best ingredients available from local farmers for each season. 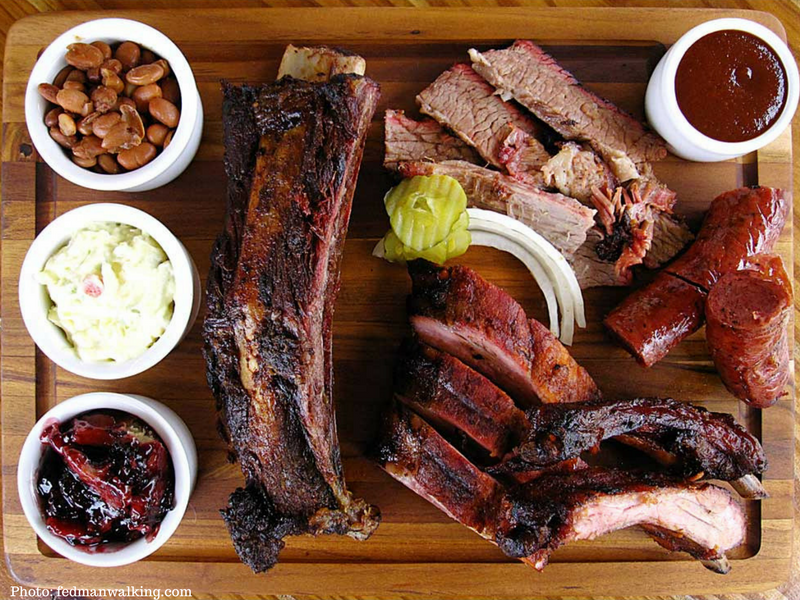 Austin is known for barbeque, this is Texas after all. With so many truly mouth watering BBQ joints to chose from how do you decided? Just pick one and go for it. You can’t miss. Here are a few suggestions from locals in the know.

They combines these two essential food groups under one roof. Owned by the Stiles brothers, they’ve been smoking classic Texas barbecue for over fifteen years. The space has a colorful history too as it was the location of the Emporium Pool Hall in the film, Dazed and Confused with Matthew McConaughey.

For more upscale dining, Uchi is an institution in Austin. Fresh fish and Japanese food in the middle of Texas may seem anomalous, even impossible, but Uchi achieves just that. Their philosophy is: At Uchi, we serve the freshest product we can procure every day. We maintain close relationships with local farmers and we fly in seafood every day from both the Fukouka and Tsukiji markets in Japan. The essence of Japanese cuisine is the ingredients; at Uchi we prepare our dishes using innovative food combinations for the most unique dining experience in Austin.

La Barbecue serves until sold out, which can happen quick. Order ahead online and skip the long wait when you pick it up. La Barbecue was named one of the top ten best barbecue joints by the Austin Statesman.

Franklin’s is only open for lunch starting at 11:00 am until, you guessed it, sold out. Are you beginning to see a theme here? Austin is serving up some great barbecue and if you want some, you just may have to wait. Or plan ahead. 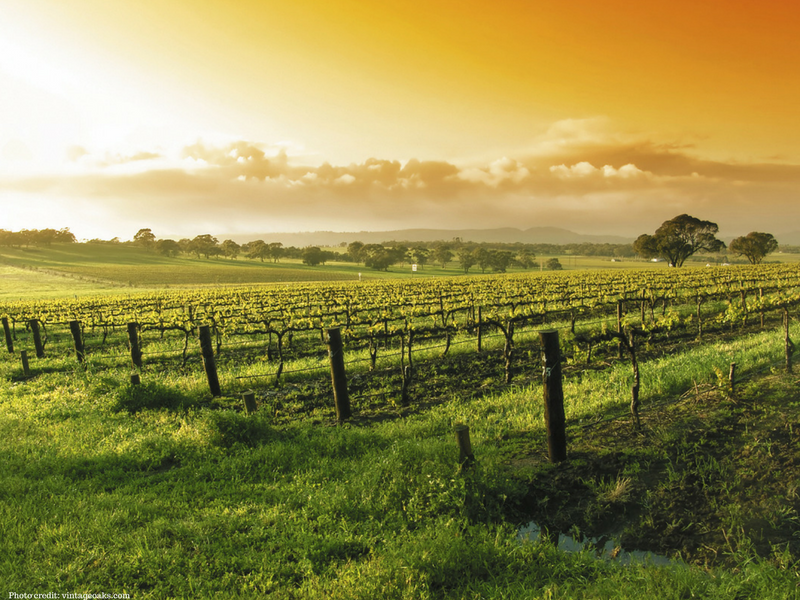 Named a top wine country destination by Wine Enthusiast, the Texas Hill Country is the second largest American Viticulture Area (AVA) in the United States. Just an hour west of Austin, it’s a pretty drive on Highway 290, and makes a nice day trip or weekend away. You won’t see many vineyards (there are a few just not along Highway 290) but you will see plenty of oak, mesquite and cedar trees and tasting rooms.

Highway 290 is called the Wine Road. Between Johnson City (home of US President Lyndon Johnson), and the charming German town of Fredericksburg, you’ll find over fifteen wineries and tasting rooms. Each has it’s own unique character and attractions.

Insider tip: When you’re tired of wine tasting, veer off 290 to Luckenbach, the tiny town where, “Everybody is Somebody.” It also epitomizes the “Texas State of Mind.” Luckenbach became known for a song which immortalized the songwriters, Willie Nelson and Waylon Jennings. You won’t find Waylon and Willie there anymore, but you’ll find Luckenbach as laid back and Texas as ever. 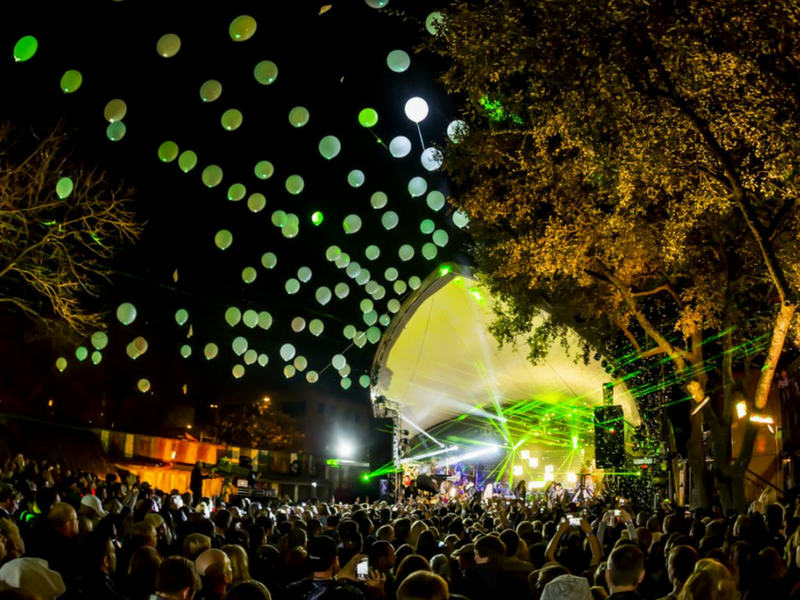 Austin is known as “The Music Capital of the World,” a slogan the city has trademarked. Just to prove the point the city hosts a program called, Music in the Air at the Austin Bergstrom Airport. You can catch live music in the terminal every day of the week.

Country might be the musical genre most associated with Texas but rock, Americana, Alternative, Folk, Rhythm and blues and jazz can be heard every night, somewhere in Austin. According to the city, more than 250 establishments feature live music. You may want to ask a friendly local for tips but there are plenty of well- known places that even the locals still flock to. Some iconic venues include: The Continental Club, Stubb’s, The Broken Spoke and The Elephant Room.

Insider tip: ACL actually runs for two consecutive three day weekends, so there’s a bit more leeway in terms of scheduling than SXSW. With 8 stages and 110 bands
Sign up for the ACL Festival Elist to be the first to know

Insider tip: Austin City Limits Live, the longest running music show on television is now housed at the Moody Theater downtown. Named one of the Top 100 Music Venues in the country the Moody regularly hosts headliners like Florence and the Machine, Radiohead, Peter Frampton, Robert Plant, Jack White and Beck. 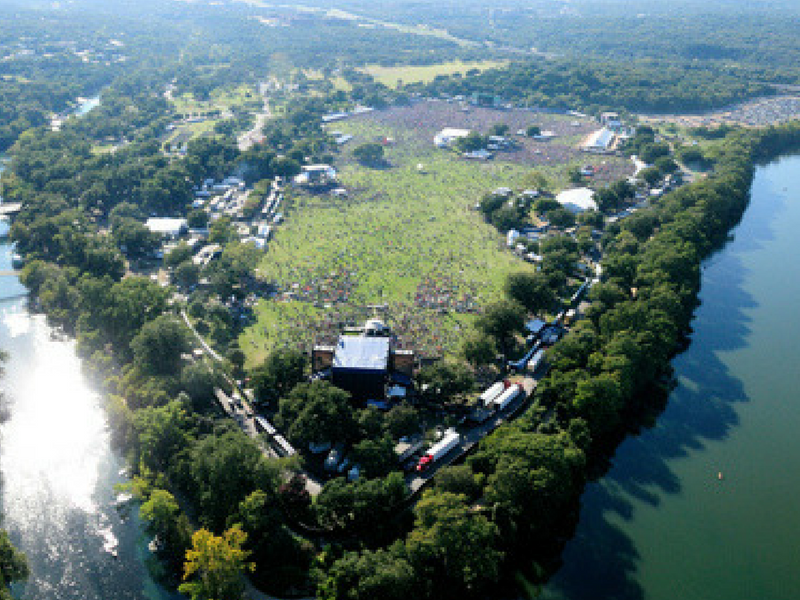 Zilker Park and Zilker Botanical Gardens are must do in Austin. There are over 350 acres of green space adjacent to Lady Bird Lake in downtown Austin. Hike, bike, run, kayak, fly kites, or take a swim at Barton Springs a natural spring fed pool that’s a cool 68 degrees year round.

The Umlauf Sculpture Garden showcases the work of former UT professor emeritus of art, Charles Umlauf, whose statues and sculptures of animals, families, religious figures and mythological characters can now be found throughout the nation as an ethereal, hidden gem.
Admission is $5 for adults, $3 for seniors, $1 for students and $1 free


Named the Second Best Place to Live in the USA by US News and World Report and one of 13 hottest cities in the U.S. by Business Insider, Austin may captivate you with its unique charms and you may wake up one day during your 72-hour visit and decide to park your boots here a little bit longer.

Penny Sadler is on a mission to visit every AVA in California with an occasional detour to the old world in Europe. She loves roaming the vineyards with her camera in and and believes that great wine pairs best with engaging conversation. Follow her on her blog Adventures of a Carry-on.