Share with your friends
Submit
Tradition claims nothing goes better with baseball than a frosty beer: this mainstay doesn’t bode well for wine-drinkers. However, baseball stadiums around the country are proving that a homerun can be cheered on with a Cabernet, Brut, or Sauvignon Blanc in hand. Here are eight ballparks where grape aficionados are welcome, as well as the best glass to order at each one. Let’s take our national pastime back from the suds. 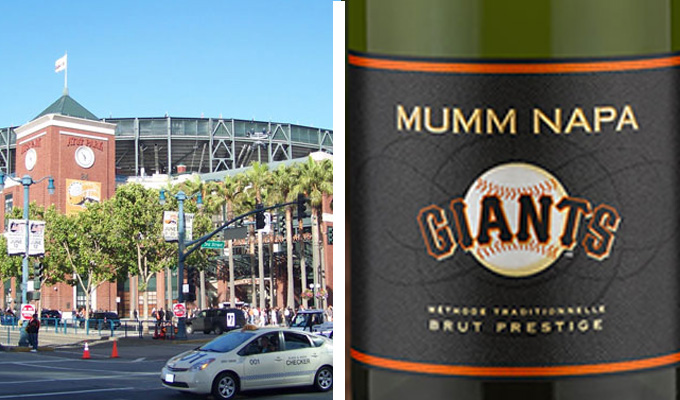 Less than an hour away from Northern California’s legendary vineyards, AT&T Park celebrates wine like most other ballparks push Bud Light. Wine is available at most concession stands, but Vintage 58—named for the year the Giants moved West—brings the posh aura of a wine bar to the promenade level behind home plate. The bar has a rotating list of wines on tap, but a favorite is the Giant’s branded sparkling wine from Mumm Napa, a “good luck elixir” that supposedly helped propel the team to win the World Series in 2012 and 2014. 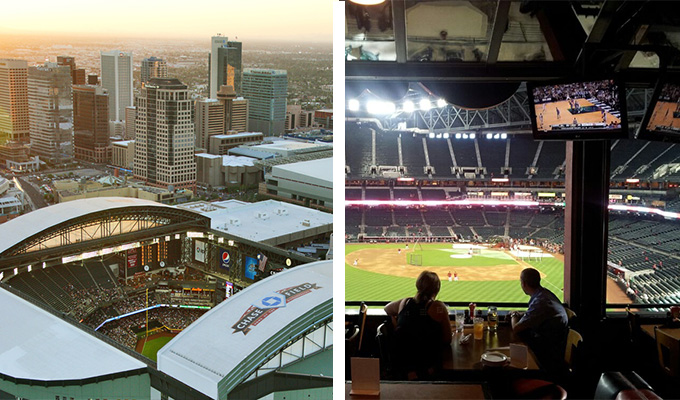 Beat the Phoenix heat at Chase Field by ducking into Front Row Grill, overlooking left field. Along with a lengthy menu of American classics, wines, and beer, the Front Row Grill also boasts the best view in the park. The pleasantly smooth Cabernet Sauvignon from J. Lohr Vineyards and Wines is a plush way to cheer on the Diamondbacks while quenching your thirst. The grapes are sustainably farmed in several vineyards across neighboring California, although the owners take care of each of their estates as if they were smaller boutique wineries. 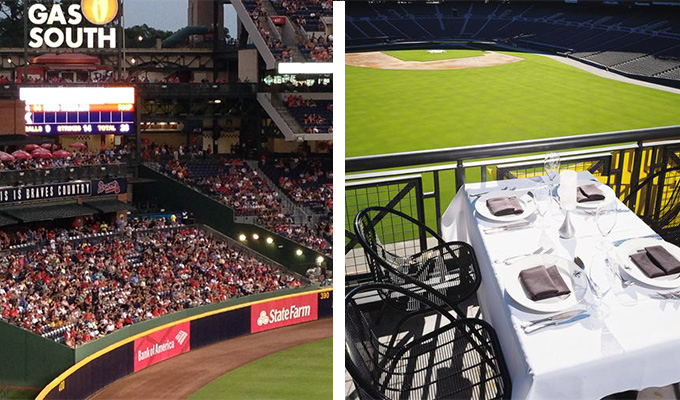 With a membership fee of $500 annually, the 755 Club is one of the most exclusive spots in Atlanta, but game day visitors can slip in if they are lucky. Expect high-end takes on ballpark classics like hot dogs and nachos as well as an unparalleled view of Turner Field from the 755 Club’s outdoor terrace. The full-bodied flavor of the Sauvignon Blanc from Whitehaven Wineries pairs delightfully with the air conditioning on humid Georgia days; it also goes well with one of the gourmet foot-long hot dogs from the 755 Club, complementing the relish and pickles with a bright botanical element. 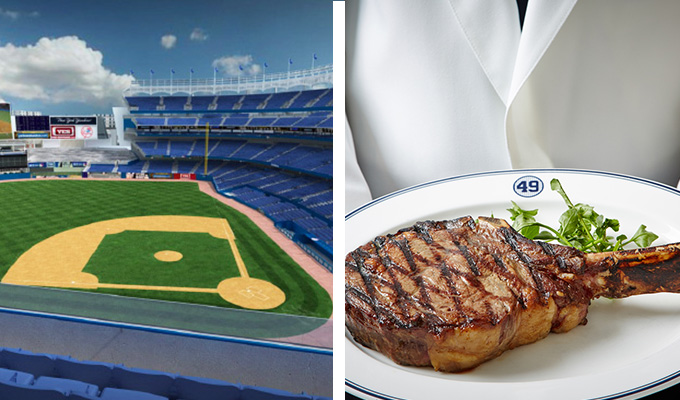 If you want to visit a classic New York City steakhouse and see the Yankees play a home game during your trip to Gotham, you can check both off your list by visiting NYY Steak at Yankee Stadium. This ballpark restaurant is often considered the best steakhouse in the Bronx, and its burger has been listed as one of the best in the entire metropolis by several publications. End your decadent ballpark feast with the 20-year Tawny Port from Taylor Fladgate: it’s rare, rich, mellow, and sweet, without becoming saccharine. 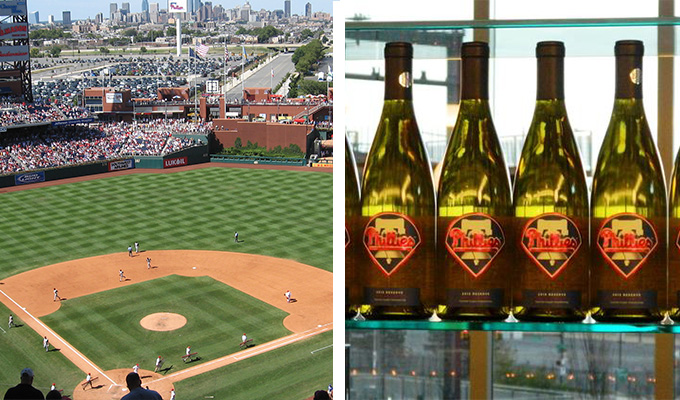 Philadelphia may always be known as a sud-soaked beer town, but its appreciation for grapes is growing fast. Last year, Citizens Bank Park announced that it will serve wine and liquor at all the concession areas on the main concourse, so Philadelphia wine-lovers can enjoy a glass each time they pick up a cheesesteak or hot dog. Try the official Phillies Wine from Chaddsford Winery at any stand: it’s a dry red with hints of cherry and vanilla. This blend, crafted just 30 miles southwest of the city in Chadds Ford, PA, tastes great by itself or with a cheeseburger. 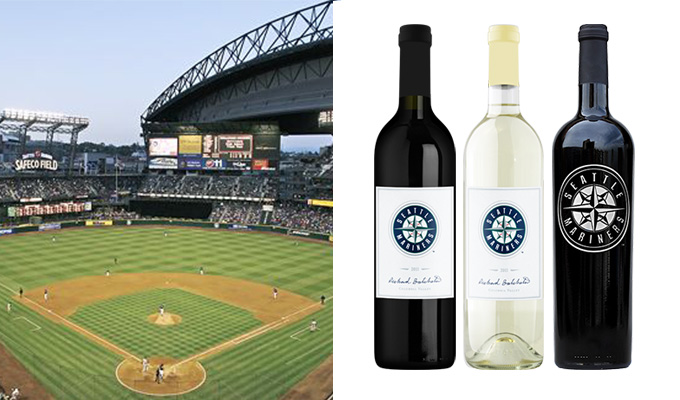 Though the wine-growing regions of Washington are too-often overlooked, the farmland surrounding the Columbia River Gorge produces a diverse and delicious selection of bottles. Safeco Field is changing perceptions by offering wine on tap at many concession stands and bars dotting the park. Grown in Goldendale, WA by Maryhill Winery, the official Seattle Mariners white blend is a crisp, citrusy way to cheer on the team. It also pairs terrifically with the bounty of Pacific Northwest seafood dishes available at the stands like the Dungeness crab roll or beer-battered cod. 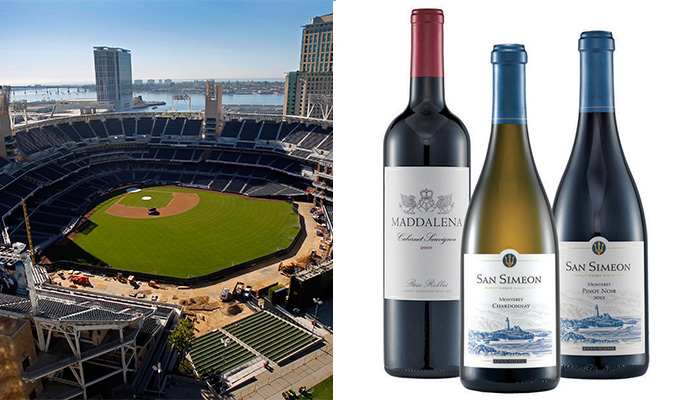 San Diego’s Petco Park welcomes wine-drinking baseball lovers by selling some of the best-ranked southern California wines at many locations around the field. A local favorite is the San Simeon Cabernet from San Antonio Winery and grown in Paso Robles, CA. This dark red is a phenomenal night wine with notes of plum, cocoa, and raspberry. The 14.5 percent alcohol content will also give you plenty of vigor to cheer on the Padres for at least nine innings. 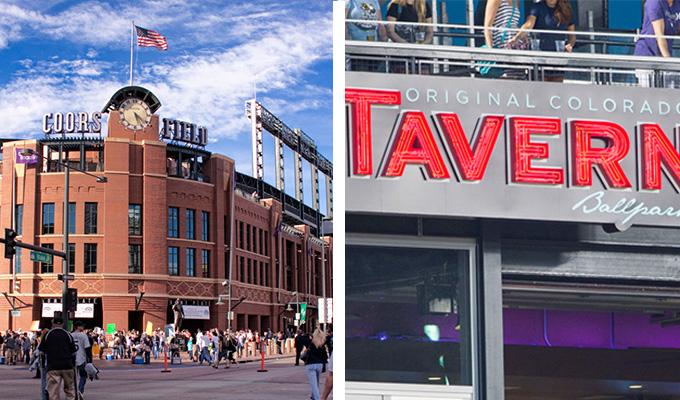 Although Coors Field is named after an iconic Colorado brewing company, wine is far from verboten at the ballpark. Several concession stands and restaurants around the field pull corks, but the panoramic views from the recently built Tavern Ballpark definitely beat drinking from a plastic cup in the bleachers. Once there, order a glass of Road to Nowhere from Fat Louis Winery, a bold Cabernet Sauvignon that will compliment any bratwurst or burger from Tavern Ballpark’s kitchen. Don’t worry—there isn’t much scientific evidence to back up the claim that Denver’s higher altitude makes alcohol more potent, but remember to stay hydrated.